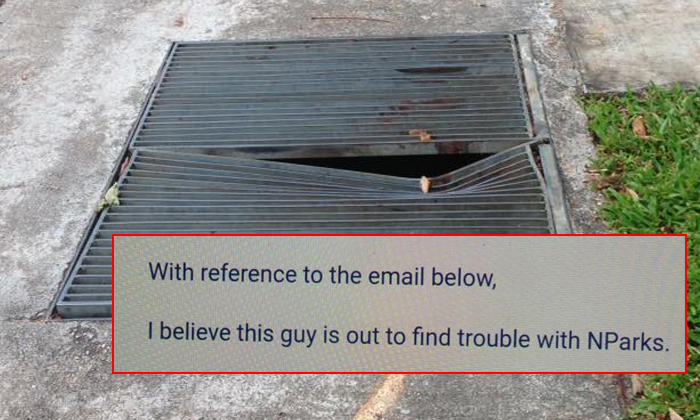 The National Parks Board (NParks) said yesterday (July18) that it has counselled an employee who used "inappropriate language" towards a jogger who had provided feedback to them via email.

The jogger, Mr Dixon Liw, said he had discovered damaged drain covers in his area of residence, Ubi Avenue 1, and believed that they were caused by tree pruning works.

He wrote on Facebook, "It affects me coz it happened on my regular jogging route."

According to Mr Liw, the Land Transport Authority (LTA) "fixed issues" but "a week later, tree pruning happened again and damage was done again. Reported issue to NParks directly and this happened..."

He was referring to an email from an NParks manager, which had apparently been sent to him by mistake.

It read: "I believe this guy is out to find trouble with NParks", apparently referring to Mr Liw.

According to The Straits Times, NParks' deputy chief executive Leong Chee Chiew responded to the incident and said:

"The National Parks Board (NParks) is aware of this incident, and has contacted Mr Dixon Liw to apologise for our staff's inappropriate language. We have also counselled the staff involved regarding his attitude towards the feedback provider.

"NParks recognises that feedback from the public helps us to manage our green spaces better, and we appreciate the effort Mr Liw took to alert us to the damaged drain gratings."

He added that NParks will be repairing the drain gratings by today (July 19).