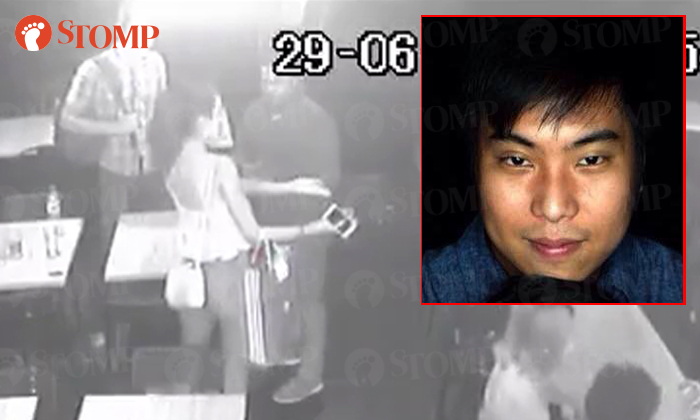 CEO of local bar Stickies, Mr Norman Then, has opened up about the online furore surrounding the infamous one-star review from an upset customer -- and his response to her that went even more viral.

Background info: Unhappy about being "chased away" by staff even before Stickies' closing time at midnight, customer Fawn Chia had taken to Facebook to voice her displeasure in a negative review.

The incident blew up further when Stickies and Mr Norman Then replied Ms Chia, calling her "a special breed of bitch" and suggesting that she "check into the pet clinic nearby" instead.

Click here to catch up on the social media war that broke out over the weekend.

Stomp reached out to Norman for his perspective regarding the saga and to find out the motivation behind his online behaviour.

Emphasising that his staff are very precious to him, Norman also said that the purpose of him speaking up is to "create awareness" and "not to bring the customer down".

In addition, we received a CCTV footage showing Ms Chia engaged in an argument with Stickies' bouncer.

She can also be seen backhanding a stack of Uno Stacko tiles off the table (which she subsequently admitted to and apologised for), though the view from the camera is slightly obscured by Ms Chia's head.

You can watch the video at the end of the article.

Stomp has produced the interview in its entirety here to maintain the essence of Norman's story.

1. How long have you been the CEO of Stickies? Are you its founder?

I am the owner together with two of my very close friends. We started this company slightly more than two years ago and we established that I would be the CEO of the company sometime late last year.

2. When you first saw Fawn's review, how did you feel?

I was quite obviously furious. I started out as a waiter in this line and I’ve been in the industry for more than 10 years. I sympathised with how they would feel having to deal with this kind of customers.

It's just that when I was only a waiter, I had no power to educate the customers on how they should behave when it comes to operation procedures, but now I can and I did.

3. Do you regret how you reacted?

I regret nothing in this life. I’ve made mistakes, we all have, but we learn from them. That’s what’s most important.

4. How do you think you should have responded instead?

If given the opportunity again, I would probably react similarly, just with a lot more tact. I stand by my decision to support my staff, and I won’t back down on it. Perhaps in the future, I would craft my words a lot better.

5. What made you send Fawn a PM besides the public response?

Pure rage I guess. On hindsight, it probably wasn’t the wisest move.

6. How have your friends and customers been reacting to the incident?

My friends have shown support and given me advice on the situation to which I am very grateful for.

The customers whom I’ve spent years building the relationships with still stick with me, pun intended, they’ve shown tremendous support which is extremely encouraging.

7. Did you get any angry messages from strangers?

Yes. I’ve received many strange messages from people I don’t know at all. Also, a lot of people have been 'flaming' me online, which I find strange considering that they are doing exactly what they are criticising me for.

Also, there has been quite a few people starting 'fake accounts' just to hurl insults at me, which I find even more perplexing because during this entire saga, I used my name and my profile, so I wonder why they’d do such things.

I’m not complaining though, if you can dish it out, you can take it right? So that’s exactly what I’m doing. I’m taking it.

I would like to ask the same people to not attack my family members or friends. That is highly unnecessary.

8. If you could, would you apologise or do you stand by your actions?

I would like to apologise to anyone who has been affected inadvertently because of this saga. The quarrel was not with anyone else so they really don’t deserve any kind of abuse.

I stand by my actions and I accept whatever it is may come. I won’t apologise for believing in my staff and for standing up for their rights and to give them a voice.

I won’t apologise for being passionate for this industry, this industry which I’ve spent more than 10 years in.

People don’t understand that some of us actually stay in this industry because the passion for serving others, the satisfaction of seeing the smiling faces of my customers when I interact or serve them, the years we’ve put in to hone this particular skill of entertaining customers while providing good service.

It’s a constant struggle and the job has enough difficulties of its own. However, all it takes is to have just one person like Ms. Fawn to behave the way she behaved, and to treat the staff the way she did, it can easily ruin anyone’s day.

I’ve seen the industry lose a lot of very talented service staff because of customers such as these. I’ve seen hardworking, passionate service people getting fired because they handled difficult customers wrongly and them not getting the support from their bosses and eventually losing their jobs.

I feel like it’s time to put an end to all this, people have to learn to respect the service staff. As much as the industry should strive to improve service standards, the people should also improve on their etiquette when dealing with the staff as well.

I know I am probably one of the first to do this and to publicly defend my staff in this fashion, but perhaps this would give voice to other owners and management people in this industry to stand up for their staff and what they believe in.

9. Has anything like this happened before? What made this time so different?

Customers have been rude before. And we have banned people from the bar just as we have with Ms. Fawn.

We really mean what we say when we don’t want her kind here. I’d rather lose a customer like her than to create an unpleasant experience for my more regular patrons.

This time was different because she chose to take the incident on social media. We felt the need to respond.

It's also because she was being particularly rude and condescending to my staff that day. She slapped a tower of UNO Stacko tiles on the table and it fell to the ground. Her friend tried to pick it up for her, to which she responded, 'Don’t do it for them, it's their job'.

She was then very condescending to my security staff and even challenged him to 'drag her out'. He politely ask her to leave so there needn’t be an incident, and then she kept asking him if he was going to drag her out.

Fortunately for me, my bouncer has more of a cool head than I do. Something which I probably need to learn from him.

Browse the gallery to see screenshots of the Facebook postings and of the CCTV footage.