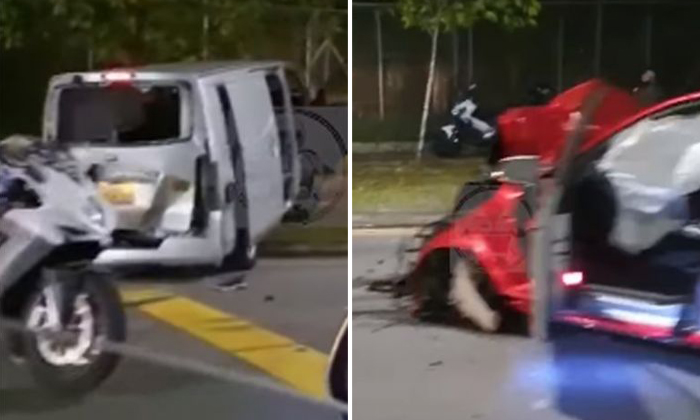 Distraught after a road accident left his eight-year-old daughter in a coma, Mr Eric Tan has been spending all his time in the intensive care unit at KK Women's and Children's Hospital, waiting for her to wake up.

Lovelynn, the elder of his two daughters, suffered a head injury and fractured both her legs.

It was only when a friend offered to help raise funds for the medical bills that Mr Tan, 45, considered the cost of his daughter's treatment.

On Tuesday (Oct 27), Mr Tan, who also has a six-year-old daughter, told The Straits Times that the response has been overwhelming.

"My phone has been ringing non-stop with people checking how they can help... I always knew Singaporeans are good and have a strong sense of goodwill, but I did not expect the overwhelming response and support coming from the public," said the operations manager, who works in transportation and logistics.

"Right now, my main concern is my daughter; my wife and I are just focusing on her. We didn't think about the bills until my friend offered to help raise money," he added.

The accident that occurred last Friday night in Woodlands Avenue 12 towards the Seletar Expressway involved a van and a red Audi car. Lovelynn was travelling in the van with her uncle, 56, who was driving, two cousins and her younger sister, Lovelle.

In-car camera footage from another car showing the crash and videos from other drivers of its aftermath were posted on social media over the weekend.

The videos show the red Audi travelling on the right of the two-lane road before it collides with the van, which is making a U-turn. The impact sends both vehicles spinning and at least two people are flung out of the van, which mounts a kerb.

Mr Tan told Chinese daily Lianhe Wanbao on Monday that the van driver who was arrested is his brother-in-law. His niece, 27, and nephew, 23, were also hurt in the crash. His younger daughter, Lovelle, was unhurt.

His friend Andy Ang, who is organising the fund-raiser, recalled seeing the girl running around the temple the day before the accident, when her family was there to celebrate the Ninth Emperor Festival.

Mr Ang, 35, and Mr Tan work in the same industry and are involved in decorating floats for the temple.

"I'm definitely shocked and saddened by the accident. She is a cheerful and active young kid... This donation drive is run by a group of us in the float decoration team who are trying to help him raise funds, as the medical fee could be costly," said the operations manager at a transport and logistics company.

As at Monday night, Mr Ang collected close to $12,000 in donations in less than a day. They plan to stop receiving donations on Wednesday night.

Said Mr Tan: "I'm very thankful for people's goodwill even though right now, I'm just waiting for my daughter to wake up."

Related Stories
Girl, 8, flung out of van after accident with Audi is still in coma with head injury and legs broken
Driver, passenger and 1-year-old baby taken to hospital after van flips over in accident with taxi at Cross Street
3 taken to hospital after accident involving 3 cars and motorcycle at Yio Chu Kang Road junction
More About:
accident
injured
child
arrest
dangerous
reckless driving
van
audi