Girl, 8, flung out of van after accident with Audi is still in coma with head injury and legs broken 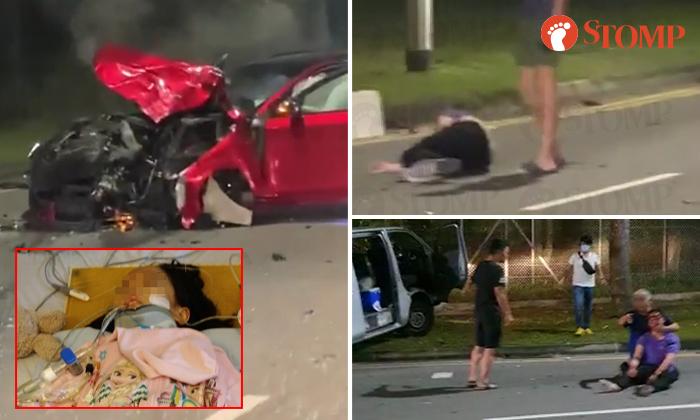 An eight-year-old girl who is in intensive care after being flung out of a van during an accident in Woodlands last Friday is still in a coma, her father told the media yesterday morning.

The 45-year-old man, who wanted to be known only as Mr Tan, told Chinese-language newspapers Shin Min Daily News and Lianhe Wanbao that the next one to two days will be critical in his daughter's recovery.

The girl was one of four people taken to hospital after an accident involving a van and a red Audi car on Woodlands Avenue 12 towards Seletar Expressway last Friday evening.

The police said they were alerted to the incident at about 8.10pm, and three van passengers, aged between eight and 27 years old, and a 32-year-old male car passenger were conscious when taken to Khoo Teck Puat Hospital.

In-car camera footage from another car showing the crash, and videos from other drivers of its aftermath, were posted on social media over the weekend.

The videos show the red Audi travelling on the right of the two-lane road before it collides with the van, which was making a U-turn.

The impact sent both vehicles spinning and at least two people are seen being flung out of the van, which mounts a kerb.

Mr Tan said his daughter needed emergency surgery at 4am after she was hospitalised, and she was later transferred to the intensive care unit at KK Women's and Children's Hospital.

Apart from her head injury, the girl also fractured both her legs, with the wound on her right leg so deep that the bone was exposed

Mr Tan also revealed that the van driver who was arrested is his brother-in-law, and his niece, 27, and nephew, 23, were also hurt in the crash.

The latter needed surgery as he had a ruptured spleen and facial injuries, but is now conscious and expected to be moved to a regular ward.

The niece, who was in the front passenger seat, was in stable condition and was expected to be discharged yesterday.

Mr Tan's youngest daughter, six, was also in the van during the accident.

She is unhurt and is now staying with her aunt.

Mr Tan told Wanbao his brother-in-law and his family would typically pick up his two girls from school and have dinner.

At the time of the accident, they had just eaten and were on their way to meet him.

He said his brother-in-law, who is out on bail, has been constantly asking about his daughter's condition.

Meanwhile, the Audi driver has not contacted Mr Tan or his family.

Said Mr Tan: "No one wanted this accident to happen and my brother-in-law's children were also injured.