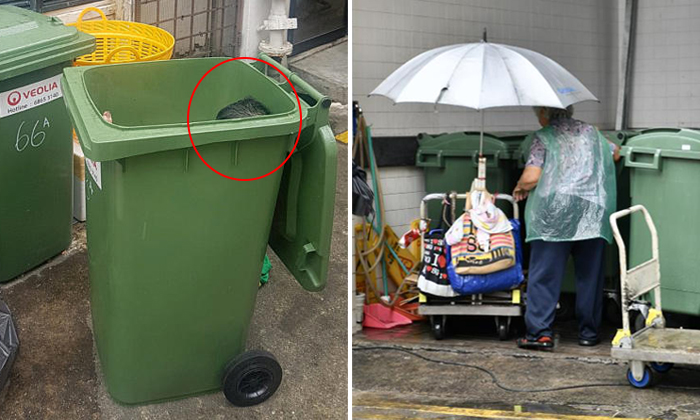 A woman in her 70s was startled to see a naked man asleep in a dustbin along an alley in Chinatown on Sep 10 while she was collecting cardboard.

In response to a Stomp query, the police said that they received a call for assistance along 211 New Bridge Road at 2.09pm.

A 37-year-old man was conscious when conveyed to Singapore General Hospital and was subsequently arrested for drug-related offences.

According to Shin Min Daily News, the elderly woman had discovered the man along 73A Pagoda Street at around 2pm.

She told reporters that she had been collecting cardboard for over 20 years but this was her first time 'picking up' a person from the dustbin.

"I saw that the dustbin had its lid open and looked in, only to see a man sleeping inside. I was shocked and wondered what had happened," said the woman, who then informed a nearby cleaner, Mr Ren.

Worried for the man's safety, 43-year-old Mr Ren decided to call the police.

When police officers arrived at the scene, the dustbin was lowered and the thin-looking man was brought out.

His clothes were next to the bin, which was reportedly empty at the time of the incident.