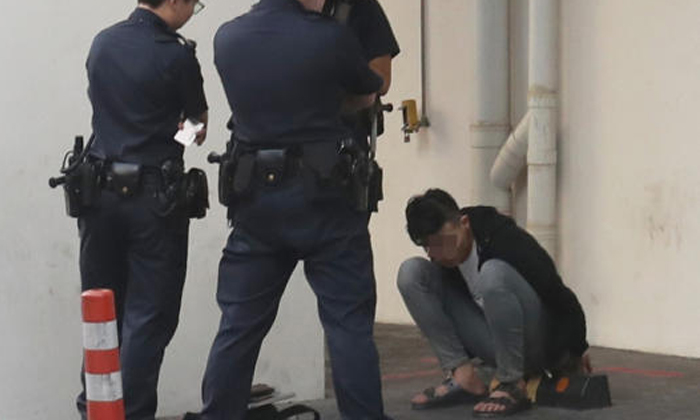 Two men were arrested for drug-related offences on Tuesday morning (May 8), after a passer-by saw them unconscious on the ground at a carpark along Foch Road.

In response to a Stomp query, the police said the men, aged 23 and 26, were arrested for suspected drug-related offences at about 10.30am.

"The younger man was also arrested for possession of an offensive weapon," a police spokesman told Stomp.

Photos published by Lianhe Wanbao show what appeared to be a knife with a red handle on the ground.

According to The Straits Times, the passer-by had alerted the police after thinking the men were dead.

The duo was found asleep in a car when police arrived at the scene. They appeared to be drunk and under the influence of drugs when woken up by police officers.

Substances believed to be drugs were discovered in the car following a search.

Related Stories
Couple arrested during CNB operation: Man threatened to harm himself, had offensive weapons
Men lying on ground, slumped in chair arrested after allegedly taking drugs in Bukit Batok
Woman and 2 men pulled over at Bishan for tinted windows, get arrested for drug-related offences
More About:
drugs
arrest
police