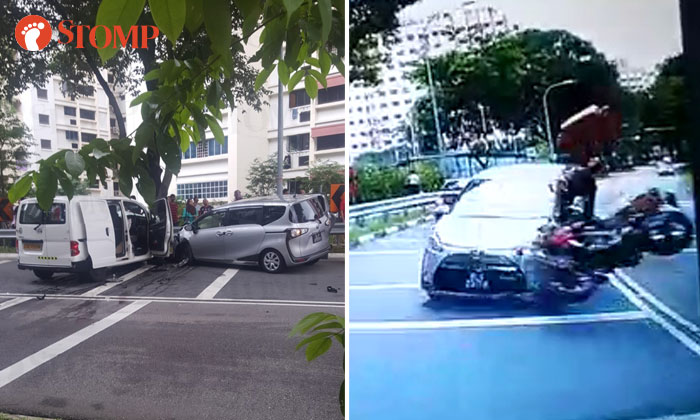 Four people, including a Foodpanda delivery rider and a four-year-old girl, were taken to hospital after a multi-vehicle accident occurred along Woodlands Ring Road on Saturday afternoon (Oct 27).

Stomp reported on the accident involving a car, a motorcycle, and a van after Stompers Jacky and Dave shared photos with Stomp taken at the scene.

Stomper Dean alerted Stomp to a video circulating online that shows what happened.

In the video footage taken from a dashboard camera, the Foodpanda delivery rider is seen travelling along Woodlands Ring Road.

A silver car is seen approaching from the opposite direction.

The car driver suddenly crosses over the road divider and drives against traffic, ramming into the rider who is sent flying before crashing into the vehicle recording the footage.

The impact causes the camera to come loose and sway vigorously from side to side.

In another video taken at the scene following the accident, a Foodpanda delivery bag is seen lying on the road.

The rider's motorcycle is mangled and the front tyre is dislodged.

In response to a Stomp media query, a police spokesman said that they were alerted to the accident along Woodlands Ring Road towards Woodlands Drive 71 at about 2.04pm.

"The motorcyclist, a 19-year-old man, along with the van driver, a 43-year-old man, and his two female passengers, aged seven and 29, were conscious when taken to Khoo Teck Puat Hospital," the spokesman said.