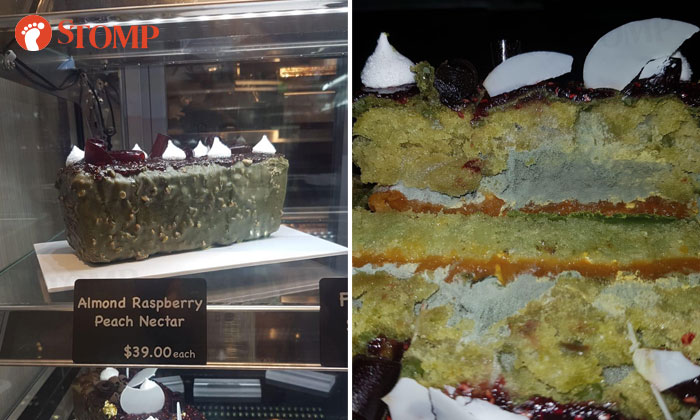 The Singapore Food Authority (SFA) has found no lapses in hygiene in its preliminary inspections after a customer bought a mouldy cake from Taste Singapore last month.

Stomper Ann told Stomp that she had bought the Almond Raspberry Peach Nectar cake for $39 from the gourmet supermarket at Holland Village at about 6pm on May 22.

She served it to her family that same evening.

However, she was horrified to find mould in the cake after cutting and serving it.

"The cake was meant for our kids at home," she said.

"After cutting the cake and serving it, we suddenly noticed there was mould inside the cake!

"By that time, one of our kids had already completed a full slice."

In photos she shared with Stomp, a greenish-grey substance is seen inside the cake. 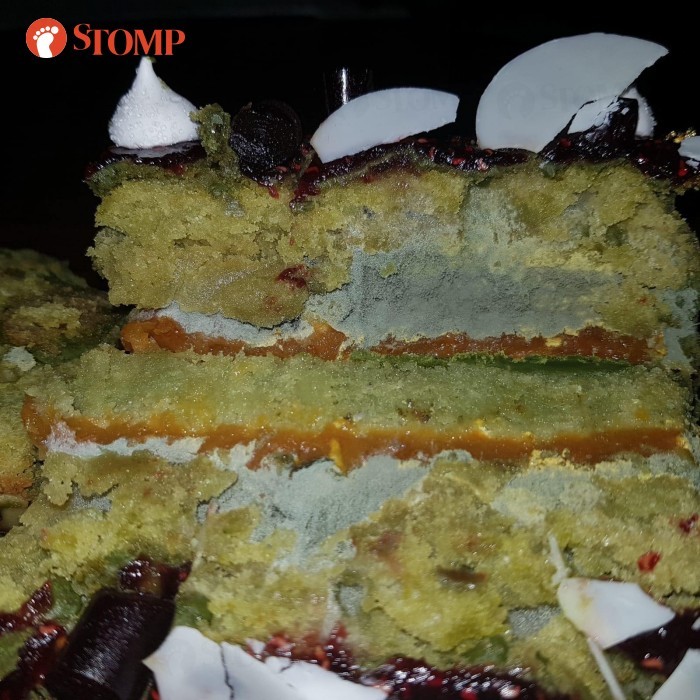 She said she tried contacting Taste following the incident but received no reply.

"SFA received feedback of the alleged purchase of mouldy cake.

"No hygiene lapses were detected during our preliminary inspections at the premises of both the supplier and retailer.

According to The Straits Times, a chef that manages the Holland Village Taste outlet, Mr Ang, confirmed the incident and said he contacted Ann on June 4 to apologise and offer a refund.

"We have since changed our supplier and have introduced labelling of expiry dates," he said, adding that the old supplier was Fairmont.

A Fairmont spokesman told ST that it has an agreement to sell pastries "on an ad hoc basis and on request" to Taste.

"Cakes are purchased via e-mail and picked up on a self-collection basis. We do not deliver to them," the spokesman added, noting that Fairmont is not liable after four hours of the product leaving its premises as it is not involved in distributing the cakes.

It also said that the last recorded order by Taste was collected on May 11, with no subsequent orders. This was 11 days before the mouldy cake was sold.

When queried, Mr Ang said that he could not confirm when the cake was purchased from Fairmont, reiterating that he was new to the job.

"Now, we throw away the pastries in display on the third day of being put on display after they have been taken out from the freezer. I'm not sure about previous practices," he said.

The SFA spokesman added in his statement: "Retailers are reminded that they must ensure that the food they sell is safe for consumption.

"SFA conducts regular inspections of food retail establishments to ensure compliance with hygiene standards, and will not hesitate to take enforcement action if necessary."