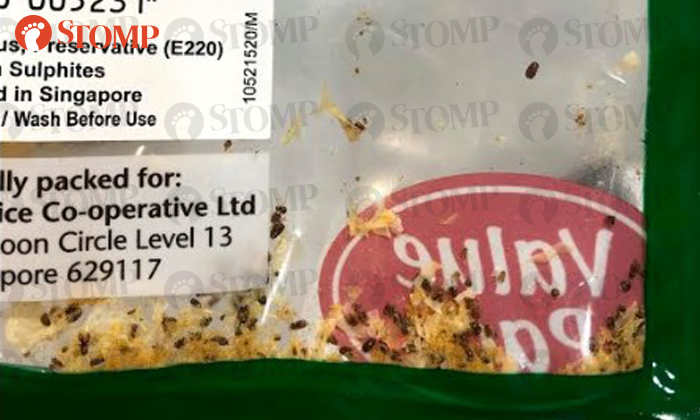 When groceries that Stomper Justin ordered from NTUC FairPrice arrived at his home, he discovered numerous bugs in a packet of white fungus.

The Pasar Dried White Fungus cost $1.85 and was part of an online order made on May 10. It was delivered on May 11.

Justin told Stomp: "Dozens of bugs could be seen inside and some were even alive.

"Look at the brown little dots in the pictures. It's utterly disgusting."

In response to a Stomp query, a FairPrice spokesman said the product has been removed from the supermarket's shelves as a precautionary measure while further investigations are being conducted.

"We have since been in contact with the customer to arrange for the product to be collected for examination to ascertain the type of foreign organism shown in the pictures as well as to offer the customer a refund."

The spokesman also apologised for any inconvenience caused, adding: "Customers who have further queries on this matter can contact us at our Customer Relations Hotline at 6552 2722 or through email at general.feedback@fairprice.com.sg."