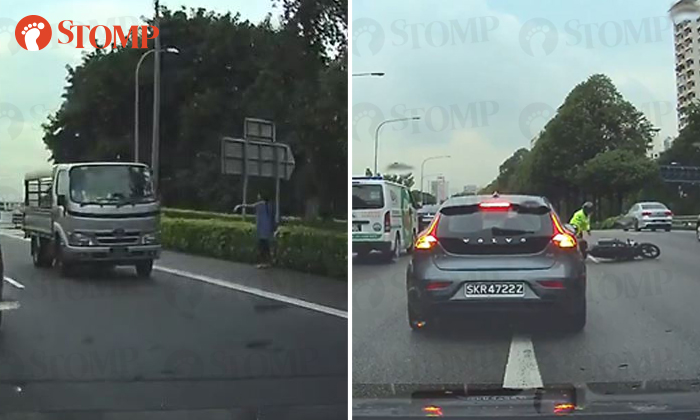 Stomper Gnuahsnave who was travelling on the CTE had what he described as a 'crazy' evening from two separate incidents that occurred just a few minutes apart.

The first incident happened at 6.12pm just after the PIE exit to Tuas on 11 Nov. A woman was seen walking at the side of the expressway.

Dashcam footage from the camera at the back of the car shows the woman attempting to flag down a taxi.

While it is not clear from the video, the Stomper said that she managed to hail a cab which had stopped along the expressway.

She can be seen in the video walking off the side of the expressway and onto the next lane, presumably to board the taxi.

A few minutes later, the Stomper witnessed a motorcycle that skidded along the expressway which resulted in the motorcyclist falling off.

The Stomper described the incident in a telephone interview, "The motorcyclist skidded. He jammed (the) brakes to avoid an accident with the white sedan in front."

He went to attend to the injured motorcyclist upon seeing the accident.

The Singapore Civil Defence Force told Stomp that they dispatched an ambulance, but the motorcyclist did not want to be conveyed to the hospital.

According to the Stomper, the motorcyclist only sustained minor injuries.

Related Stories
Man stops car in Yishun twice to confront Honda motorist -- who just ignores him and drives away
Uncle with a death wish walks against traffic on first lane of PIE
School bus driver beats jam along Woodlands Street 41 -- by going against traffic
More About:
accident
CTE
reckless
motorcycle