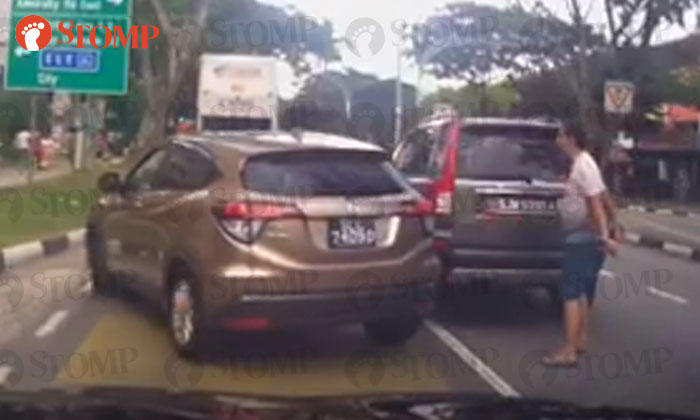 A Volvo driver alighted from his vehicle twice in Yishun on Oct 24 at around 10am to confront a Honda motorist, but failed to do so as the latter drove away on both occasions.

Stomper John recorded what happened with his dashboard camera and alerted Stomp to the incident.

In a video he sent, the Volvo driver can first be seen alighting just before a pedestrian crossing and walking up to the Honda motorist when the traffic light was showing red.

As he was doing so, the light turned green and the Honda motorist left the scene before getting confronted.

Shortly after, both of them stopped their vehicles near a traffic junction after making a right turn. The Honda was at the back of the Volvo.

Like what happened previously, the Volvo driver alighted and tried to confront the Honda motorist.

The latter, however, recklessly changed lanes and drove away, much to the chagrin of his fellow road user.

Both of them went in separate directions thereafter.

John is unsure what exactly led to the dispute, but suspects that it was due to an overtaking incident before the videos were taken.

Related Stories
Woman takes video of couple and scolds them for sitting on Reserved Seat, but gets slammed by netizens
'Atas' Chinese girl accused of cutting queue throws money at woman, gets 'treated' to vegetables
Fight breaks out at Kallang MRT Station
More About:
dispute
reckless
Yishun