Motorcyclist lies on road, gets taken to hospital after accident with car along PIE 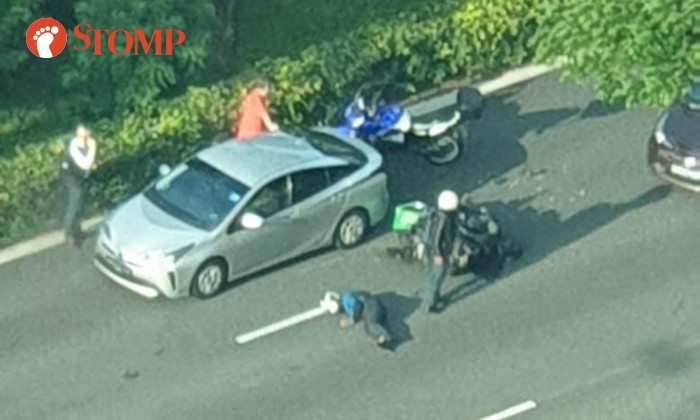 A 36-year-old male motorcyclist was taken to hospital after an accident with a car along the Pan-Island Expressway (PIE) on Wednesday (Jan 20).

Stomper Jess, who lives at a Bukit Batok Street flat overlooking PIE, said she happened to see the accident scene when she looked out of her bedroom window.

In the video that she sent, a man can be seen lying in the middle of the road while another man wearing white stands beside him, possibly to alert oncoming cars to avoid the lane.

A lorry can then be seen slowly moving from the right-most lane, which was where the accident occurred, to the middle lane.

The video then cuts to another clip that shows an ambulance at the scene.

"I took these videos from my house. I was at my bedroom and happened to see that an accident had taken place. I didn't see how it happened but I saw a man lying on the road," Jess said.

"I feel sorry for the injured man and I really hope he is alright."

In response to a Stomp query, the police said they were alerted to the accident involving a car and a motorcycle at 8.52am.

"The 36-year-old male motorcyclist was conscious when conveyed to National University Hospital," added the police.

Related Stories
Man appeals for witnesses after son gets flung across road in hit-and-run accident at Cashew Road
Motorcyclist taken to hospital after accident with car at Woodlands Road
23-year-old student flung 2.5 metres after getting hit by car at Jurong West zebra crossing
More About:
accident
car
motorcycle
PIE