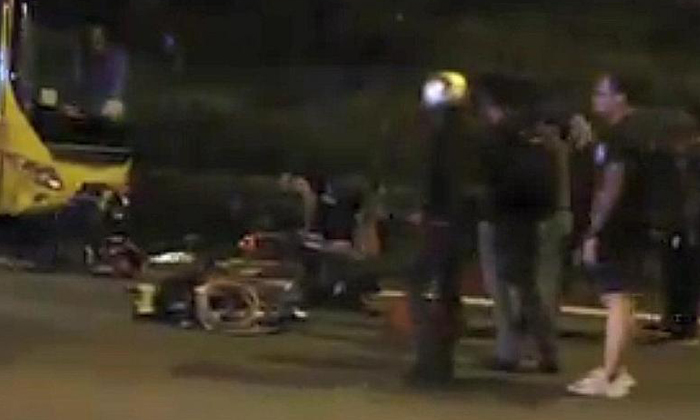 Exactly a year after his girlfriend died in the accident, a man was convicted and sentenced for negligently causing her death.

But in a tragic twist of fate, she was killed in an accident on Dec 12 last year after being run over by a bus.

Danial was fined $6,000 yesterday and disqualified for three years from holding all driving licences for causing Ms Lim's death by negligent act.

The court heard that the couple were on a motorcycle along the Pan-Island Expressway at about 10pm on Dec 12 last year. Ms Lim was riding pillion.

Two vehicles had collided suddenly on the road, and a lorry behind the vehicles braked to avoid the collision. But Danial could not brake in time and collided into the lorry's left rear.

The couple were thrown off their vehicle and fell on the road. A bus that was less than 10m behind them could not avoid Ms Lim and ran over her.

She had to be extricated from under the bus and was taken to National University Hospital (NUH) unconscious.

She reached the hospital at 11.10pm but died 15 minutes later from extensive injuries.

Danial, who was conscious, was also taken to NUH, and was admitted to a high dependency ward with fractures on his finger and collarbone.

Yesterday, Danial, who admitted that he had failed to keep a proper lookout ahead, was seen closing his eyes periodically while in the dock as the incident was recounted in court.

He appeared to hold back tears as the account of the accident was read out.

Deputy Public Prosecutor Lee Jing Yan told the court that Ms Lim was a loved one of the accused, and that the circumstances of the case were tragic and unfortunate.

He asked the court to impose a fine of $6,000 and a disqualification of three years.

Danial's lawyer, Mr Henry Lim, urged the court to be compassionate. He said his client had tried to evade a head-on collision with the lorry and added that the couple had planned to get married after Danial completed his NS in the Singapore Civil Defence Force.

He added that his client also suffered as a result of the accident and pleaded with the court for a lower fine, saying Danial did not have $6,000.

District Judge Marvin Bay said he noted the "extremely tragic circumstances" of the case. But he said the prosecution had also been very moderate in its sentencing position.

The judge then issued the fine and disqualification, but he allowed for the fine to be paid in instalments of $1,000 a month.