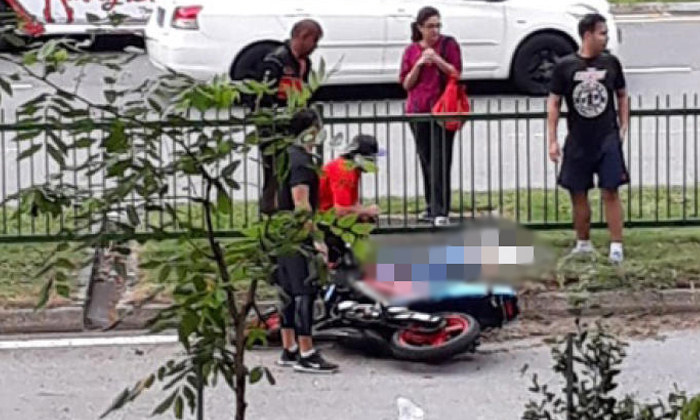 A 33-year-old motorcyclist died after crashing into a central road divider along Tampines Avenue 2 on Tuesday morning (July 31).

The accident occurred in the direction of Tampines Avenue 9, in front of Block 208.

In response to a Stomp query, the police said they were alerted to an accident involving a motorcycle at 9.09am.

The victim was unconscious when taken to Changi General Hospital, where he subsequently succumbed to his injuries.

A witness who saw the entire incident told Lianhe Wanbao how it happened. He said: "I was sitting at the void deck and looking at vehicles pass by.

"The motorcyclist was travelling on the leftmost lane when he suddenly swerved right and crashed into the central road divider."

According to the witness, the violent impact of the collision caused the motorcyclist to be flung more than one metre away before landing on the grass patch.

"Five to six people came forward to help and the ambulance arrived soon after," he added.

Another witness who declined to be named said it was unclear why the motorcyclist suddenly lost control of his bike.

The deceased's wife has posted an appeal on Facebook for witnesses or anyone with video footage of the accident to come forward.