Mosque in Jurong touches hearts by offering cold drinks to everyone, regardless of race or religion 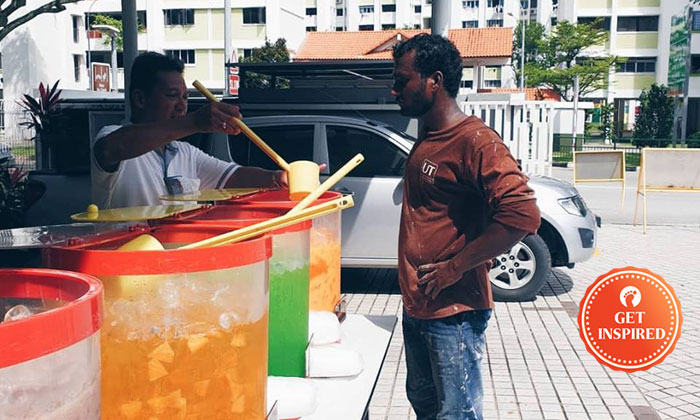 The generosity demonstrated by a mosque in Jurong has warmed the hearts of Singaporeans from all backgrounds.

A Stomper alerted Stomp to a photo posted by Al-Mukminin Mosque showing a man scooping out a drink for another guy with paint and dust covering his clothes and shoes.

The caption read: "You must be thirsty. Here's a drink for you, brother."

The mosque wrote that in light of the recent hot weather and in conjunction with their Maulid season, they are providing free drinks after Friday prayers.

"Everyone can come and have a drink," it wrote.

The post was met with comments of appreciation from Muslims and non-Muslims alike.

Facebook user Karen Lim wrote: "Thank you so much... so much love."

"Whatever shape, colour, background. Inside we are all the same. Highest praise to all of you at Al-Mukminin mosque."

Twitter user Hafiyyan Rasid posted his thanks to Al-Mukminin for their initiative as well.

We have this too in Malaysia by team Unggas. Diorang selalu buat air balang masa event Freemarket. ❤ https://t.co/oiCOjQNJpm

He told Stomp that he had gone to the mosque on Jan 4 for Friday prayers and was pleasantly surprised to see the drinks being offered in the carpark at about 2pm.

"This kind of kindness boosts your morale for the rest of the day," he said.

He added that there were many drinks including Bandung, Milo and Asam Boi. He chose to have a cup of iced Milo.

"The cold drinks help keep you cool in the hot weather."

In response to a Stomp media query, Al-Mukminin Mosque said they have been giving free drinks to people since 2017 as part of a "Free Food For All" initiative that started in 2016.

A spokesman said: "Al-Mukminin Mosque started the 'Free Food For All' initiative in conjunction with our 30th anniversary in 2016.

"In line with our mission of 'Inspiring Community of Noble Character' or #inspiringMukmin, we aim to inspire everyone (regardless of race or religion) with the teachings of our beloved Prophet Muhammad (peace be upon him); especially on the values of caring and sharing.

"It is also a way for us to show our appreciation to our congregants, neighbours and friends for all the support and love they have given the mosque.

"The provision of a free variety of drinks was first done before the Friday prayers on 1 September 2017, which was also the day of Hari Raya Haji 1438H.

"It was from the congregants' positive response that led us to have it again this time, in conjunction with the Maulid season.

"Located at the carpark canopy near the mosque's main entrance, operations start from 11.30am; while stocks last.

"We welcome everyone and anyone to come and grab a drink."

Related Stories
When some eateries charge for iced water, this restaurant's kind gesture is truly refreshing
Christmas tree with gifts at Segar Road void deck: 'Choose a present and feel free to bring me home'
You can donate food to fridges for the needy at Block 442 in Tampines: Stomp did!
More About:
inspiring
kind
heartwarming
mosque
free stuff