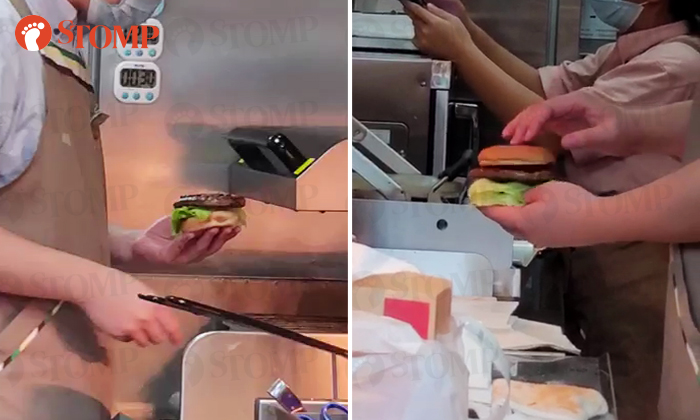 An employee who was caught on camera handling and preparing food without gloves on has been given a stern warning and sent for a refreshing training, Mos Burger told Stomp.

Stomper Kelvin said he visited the fast food restaurant's Tai Seng outlet on January 26, at around 3pm, for a takeaway order.

He was concerned when he saw an employee handling his food without any gloves on.

In a video taken by Kelvin, the employee can be seen preparing a burger and packing it with his bare hands.

Kelvin shared: "I didn't confront the staff but threw my food away.

"I subsequently gave feedback to Mos Burger and they apologised."

In response to a Stomp query, a spokesman for Mos Burger said: "Thank you for informing us about this incident for our immediate attention and actions.

"We view such incidents very seriously as the safety and well being of our customers are of utmost importance to us.

"We have conducted a thorough investigation on this incident. We have given the team member involved a stern warning and sent him for a Food Hygiene and Safety Refresher Training. We have also reinforced the hygiene practices with our restaurants."

Mos Burger has also been in touch with the customer to inform him about the actions taken and provide him with assurance, the spokesman added.