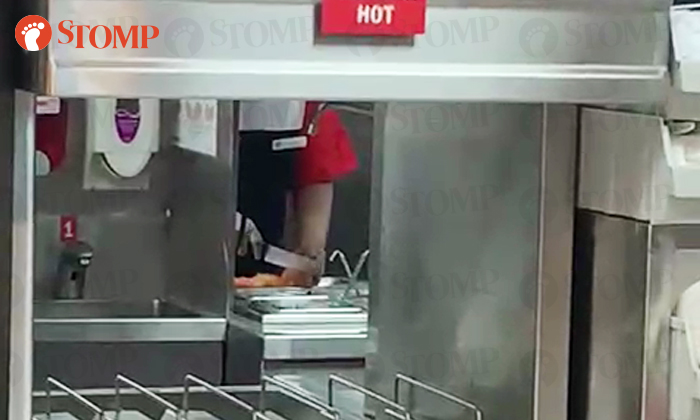 An employee at KFC's Canberra Plaza outlet who was seen handling food without gloves on has been given a 'stern warning', said a spokesman for the fast food chain.

Stomper J said he visited the fast food restaurant at around 8.30am on December 30, when he saw "[a] kitchen staff cutting food without disposable gloves".

J, who took a video of the incident, subsequently reported the matter to KFC.

Responding to a Stomp query, a KFC spokesman said: "We would like to first of all, assure the public that at KFC, food safety and hygiene is, and always will be, our top priority.

"The staff who was handling the tomatoes should have been wearing gloves.

"From our investigations at KFC Canberra Plaza, we have spoken to the staff in question and he confirmed that his hands were washed and sanitised before handling the tomatoes.

"However, it was a lapse on his part regarding the lack of gloves.

"We have since issued a stern warning to the staff in question and reiterated the importance of the use of gloves when handling food items to our staff at all KFC outlets in Singapore.

"The KFC Canberra Plaza team as well as the manager has also been counselled to ensure all standard procedures are strictly adhered.

"Currently, we are doing our best to reach out to the customer to thank him for his feedback and to provide assurance that we follow strict food safety procedures in all our restaurants."

Under the Environmental Public Health (Food Hygiene) Regulations, food handlers must not handle cooked and ready-to-eat food with bare hands. It is not a requirement for food handlers to wear gloves when handling raw meat.