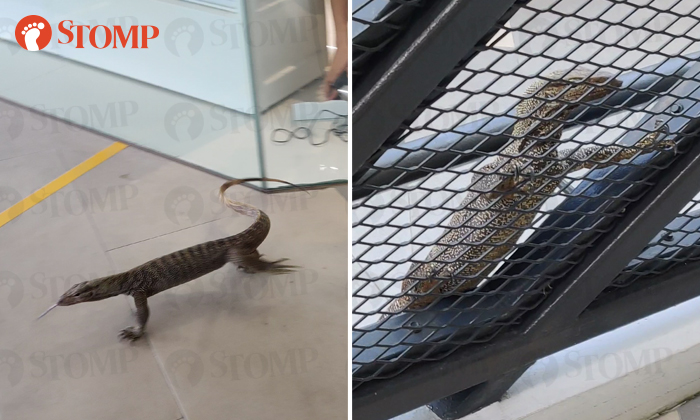 A monitor lizard was spotted outside Wisteria Mall in Yishun on Sunday morning (Apr 13).

Stomper Faiz was about to leave the mall after buying groceries from FairPrice when he noticed the reptile at around 10.45am.

Faiz recounted: "There was a cleaner who was beside me and spraying the monitor lizard with water, hoping it would escape the premises.

"However, the lizard did not move when sprayed with water and didn't seem scared of humans.

"It almost entered the mall but we managed to stop it.

"It was nice to see such a beautiful creature that was just trying to jalan jalan."

A video that Faiz submitted to Stomp shows the creature eventually slipping out through a gap under a fence and looking at people from the outside.

Monitor lizards are known to be shy animals and will not attack humans unless provoked or cornered.

Members of the public are advised to leave them alone. Do not touch, chase or corner them as they may attack in defence.

For more information about dos and don'ts when encoutering a monitor lizard, check out the National Parks Board website.

Related Stories
The most chill 'jaywalker' you will ever meet in Yishun
Stomper encounters monitor lizard at Upper Serangoon View: "It's the biggest I've seen"
Monitor lizard runs away after being spotted by Stomper outside mall in Punggol
More About:
monitor lizard
animals