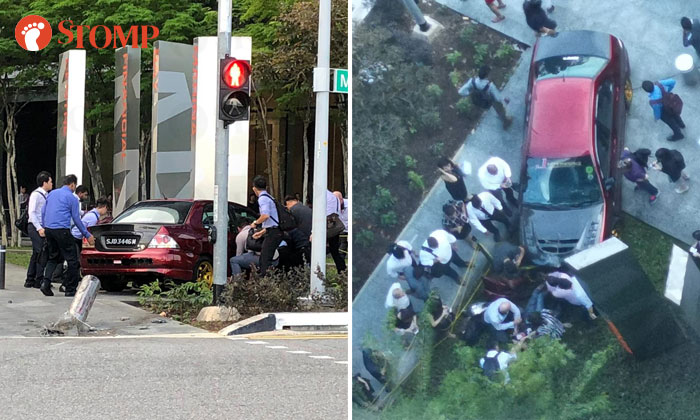 Four people were taken to hospital after a Mitsubishi collided into pedestrians and crashed through a bollard in front of Marina Bay Financial Centre on Monday evening (Apr 15).

The 25-year-old driver, who was one of the four taken to hospital, was arrested for causing grievous hurt by negligent act.

The other three were female pedestrians hit by the car.

Stompers Zee Ma, Ben Lee and Freddy alerted Stomp to the accident and shared photos and videos taken at the scene.

Zee Ma was at the junction of Central Boulevard and Marina Way when the incident occurred.

"I had just crossed the road when the red car came screeching around at high speed and ran right up to the crossing.

"A woman was screaming after that.

"A lot of guys crowded around and lifted the car on one side.

"I think the woman was pinned under the car."

She added that that crossing is usually busy because pedestrians use it to get to Marina Bay MRT Station.

She noted that a pavement bollard at the junction was unable to stop the car from mounting the pavement.

"It couldn't have anyway, not with direct impact," she said.

Wildlife conservationist and Naturalist Mr Ben Lee, 55, was visiting his clients at Marina Bay Financial Centre when the accident happened.

In a video he took, Singapore Civil Defence Force (SCDF) officers are seen lifting a woman onto a stretcher.

In response to a Stomp media query, the SCDF said they received a call for assistance at 6.10pm.

The police provided Stomp with the following statement regarding the accident:

"On 15 April 2019 at 6.08pm, the police were alerted to an accident involving a car and three pedestrians at the junction of Central Boulevard and Marina Way.

"The male car passenger and three female pedestrians, aged between 35 and 46, were conscious when conveyed to Singapore General Hospital.

"The car driver, a 25-year-old man, was subsequently arrested for causing grievous hurt by negligent act.