Cabby arrested after colliding into pedestrians outside Jurong Point, 2 women taken to hospital 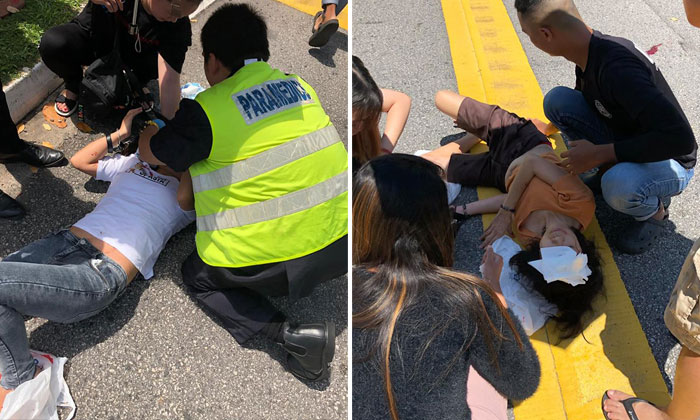 A 63-year-old taxi driver was arrested for dangerous driving after he collided into pedestrian at the junction outside Jurong Point on Saturday morning (Apr 13).

Facebook user Cassendra Tay posted photos taken at the scene of the accident and shared what she witnessed.

She said she saw the ComfortDelGro taxi hitting the victims, who flew and hit their heads on the road.

"Both were bleeding profusely," she said.

In the photos, several passers-by were tending to the women, holding umbrellas over their head and offering tissues.

In response to a Stomp media query, the police said they were alerted to the accident at the junction of Jurong West Street 64 and Jurong West Central 3 at 11.36am.

"Both pedestrians, aged 26 and 54, were conscious when conveyed to Singapore General Hospital," a police spokesman said.

"The taxi driver, a 63-year-old man was arrested for dangerous driving.

ComfortDelGro Corporation Limited's group chief corporate communications officer Tammy Tan said the company was "deeply sorry" to learn about the accident and has suspended the cabby with immediate effect, reports The Straits Times.

She said that the company's top priority at the moment is the welfare of the injured pedestrians.

"We are already in touch with (them) and will assist them the best we can," she said, adding that ComfortDelGro is assisting the police with investigations.