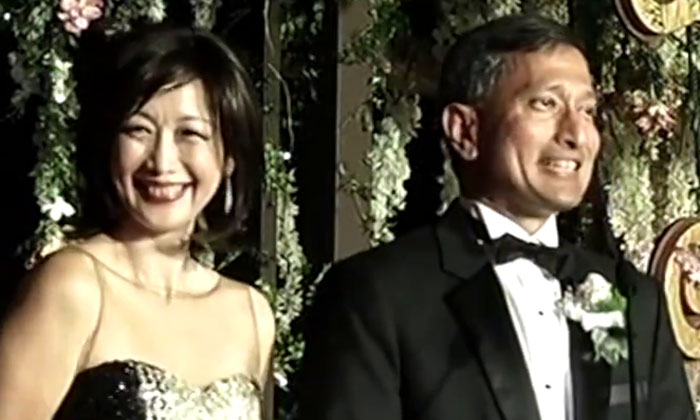 Minister Vivian Balakrishnan just celebrated his 30th anniversary with his wife, Joy and in honour of the milestone, decided to share his views on happiness and marriage.

He posted a video of a speech he made at his daughter, Natalie's wedding three years ago on his Facebook page.

With his wife, standing and smiling beside him, he started by saying that when getting married, choosing the right spouse is the most crucial decision you will have to make.

"It can be a source of great happiness or the converse," he said.

He advised his three sons that the best predictor of their future partner is their potential mother-in-law.

Nodding to his wife he added, "I think you will all agree with me, Nathaniel (his son-in-law) has chosen well".

He reminisced about holding Natalie, his first child and only daughter, for the first time and said that having a child is "far more significant than getting married".

He added that he also realised that day how much parents love their children and how much his own parents loved him.

"We pay love forward to the next generation," he said.

His voice cracked when he spoke of how he wished his own mother could have been there at the wedding but pointed out how his daughter was wearing her diamond crucifix in her grandmother's memory.

In the course of bringing up his four children, the minister said that he often sought his wife's advice and she told him:

"The most important gift you can give your children is to love their mother."

This was met with laughter and applause.

"Children need that sense of absolute security from knowing that their parents love each other.

"Children need the role model[s] of parents who love each other and are committed for a lifetime.

"In a day and age of instant gratification, these old-fashioned values of commitment for the long term, loving your partner and making it a life's enterprise, I think this is even more essential in this day and age."

He spoke on how he and his wife have been "very happy and very blessed" and wished the same happiness for his daughter and husband.

He urged them to pay it forward for their future.

Related Stories
Couple's wedding photos show what it's like being together forever
Actress and DJ Apple Hong announces she "accidentally got married" to Singaporean businessman
Cheryl Wee's unforgettable proposal and dazzling wedding: "I never knew I could be this happy"
More About:
marriage
minister
touching
love
relationships