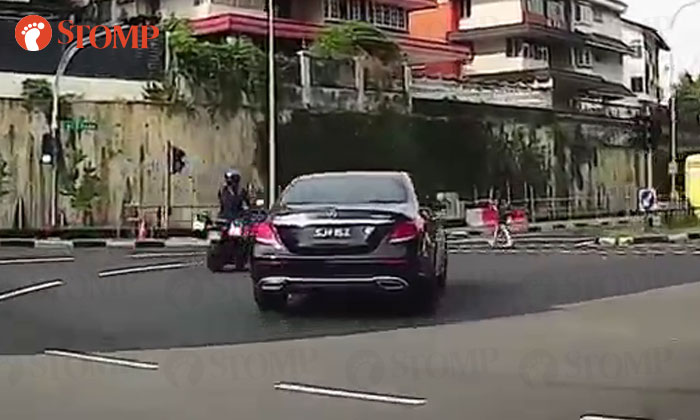 A Mercedes-Benz driver came dangerously close to hitting both a motorcyclist and a pedestrian as he was making a right turn at Lorong Chuan on Monday afternoon (Feb 18).

Stomper Alex alerted Stomp to the incident and shared a video he had taken from his car's dashboard camera and posted on Facebook.

The Mercedes-Benz with licence plate number SJV15Z is seen waiting for the traffic light to turn green in front of Alex's vehicle.

As he makes a right turn, he manoeuvres out of the turning lane to overtake the motorcyclist in front of him.

He does this as they approach the crossing where a young girl is seen crossing the road.

The rider raises his arm at the driver before the video ends.

"This happened in a school area nearby the Australian International School and St Gabriel's Secondary School," Alex said.

"The driver of the car said he was rushing to pick up his son after he was confronted by me and the rider.

"I don't think that it is a valid explanation."