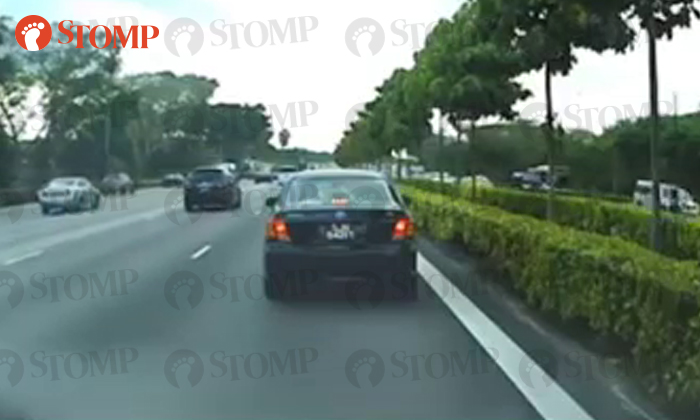 Stomper Toh had his festive mood marred on the third day of Chinese New Year (Feb 7) when he encountered a road bully while travelling along the Seletar Expressway (SLE).

Toh said that he was going in the direction of the Bukit Timah Expressway (BKE) at around 3.20pm when the incident occurred.

He recounted what happened: "Traffic was slightly heavy and I was travelling on the first lane of the expressway when I saw a black Toyota (SJN5421T) entering the SLE from the left at high speed.

"He cut all the way from the last lane to the first lane, then started to tailgate me and honked at me multiple times for no reason. I was shocked and I feared for the motorcycle beside me.

"I tried to cut to the second lane to give way to him but he swerved in front of me by overtaking from the left dangerously, almost causing a side collision. There would have been an accident had I not jammed hard on my brakes.

"Alarmed and distressed by his actions, I honked at him to warn him of the danger he was posing.

"He then came to a complete stop on the first lane, even though there was no car or obstruction in front of him as shown in the video clip, causing me to stop behind him for no reason.

"Fortunately, there was no car behind me or it would have caused an accident .

"The driver then started moving off very slowly and cut to the last lane, even winding down his window to taunt me.

"I sped up to avoid him and any confrontation as I feared for my safety, but he sped up and continued to follow me.

"He then purposely overtook me again by abruptly swerving in front of me and jamming on his brakes, causing me to jam on my brakes to avoid another collision.

"The white car behind me almost hit my rear because of the Toyota driver's actions.

"I am totally disgusted with his actions of dangerous driving and road bullying.

"Not only did he instill fear and distress in me, he totally has no regard for safety in addition to violating traffic rules and regulations."

Stomper Toh, who made a police report on the same day, feels that the driver "should be dealt with severely by the long arm of the law".

He also told Stomp that he did not do anything that could have sparked the Toyota driver's actions.

Related Stories
Why did driver of SGN2489D abruptly stop on PIE, resulting in accident?
Here's what happens when you abruptly stop in the middle of an expressway
Chevrolet driver jams on brakes, swerves left and right 'like snake' to block Stomper
More About:
road bully
dangerous driving
reckless driving