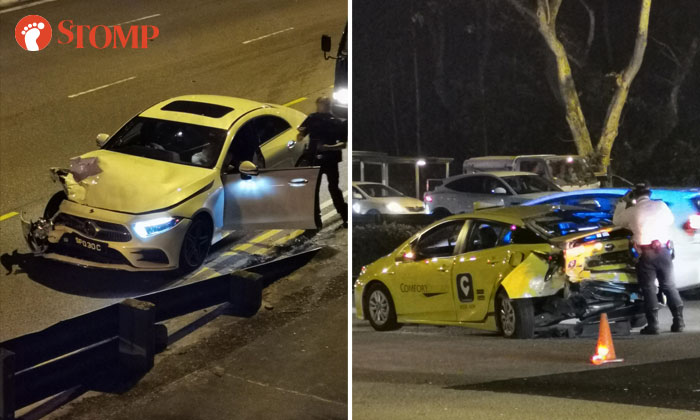 A 45-year-old driver was arrested for suspected drink-driving after his car collided with a taxi along Upper Bukit Timah Road towards Jalan Bukit Anak on Monday night (Feb 15).

Stomper Kelvin alerted Stomp to the incident involving a Mercedes-Benz car and ComfortDelGro taxi and shared photos of the aftermath.

In the photos, the metal on the front-right of the Mercedes-Benz has been ripped away.

The rear of the taxi is severely damaged as well.

"Fortunately, it happened during off-peak hours at night or else there would have been a massive jam," said the Stomper.

In response to a Stomp query, the police said they were alerted to the accident at 8.51pm.

"The 59-year-old taxi driver was conscious when conveyed to National University Hospital", a police spokesman said.