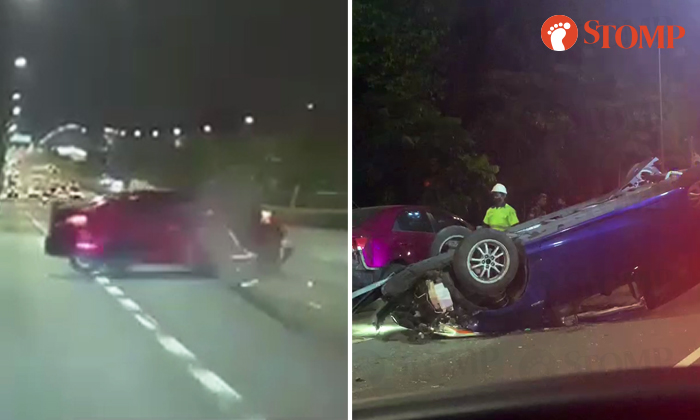 A car driver and a motorcyclist were arrested for suspected drink driving after two accidents that occurred along the Central Expressway (CTE) in the early hours of Sunday (Jan 31).

The police told Stomp that they were alerted to an accident involving two cars along the CTE, towards Seletar Expressway (SLE) and before the Yio Chu Kang exit, at 1.06am.

"A 44-year-old male car driver and his female passenger were conscious when conveyed to hospital," police added.

A 27-year-old male car driver was arrested for suspected drink-driving.

A video posted by Facebook page SG Road Vigilante shows a red car travelling at high speed and then slamming into the rear of a blue car.

The red car is sent spinning from the impact before hitting the road barrier, while the blue car is left overturned.

Peanut said: "The car that flipped over is so suay."

The police said: "Subsequently at 1.32am, a motorcycle hit a police car belonging to officers who were attending to the accident."

The 29-year-old male motorcyclist was arrested for suspected drink-driving.

Police investigations into both incidents are ongoing.