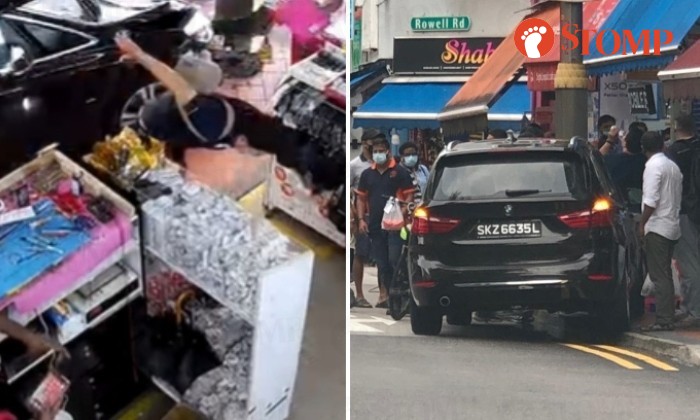 A 34-year-old male driver was arrested for drink driving after he crashed into a shop along Serangoon Road towards Upper Serangoon Road on Tuesday (Dec 29).

In response to a Stomp query, the police said they were alerted to an accident involving a car and two pedestrians at 5.07pm.

The police added that a 40-year-old male pedestrian was conscious when conveyed to Raffles Hospital. The 34-year-old male driver was subsequently arrested for drink driving.

A video of the incident that was posted on ROADS.sg's Facebook page has been widely circulated and has since garnered over 28,000 views.

In the video, two pedestrians can be seen walking on the pavement when a black BMW suddenly crashes into both of them.

The pedestrian wearing beige pants appears to have been hit by the car's bumper and knocks into a pole before falling to the ground.

The other pedestrian gets hit by the right side of the car and stumbles into a rack displaying bags, before quickly getting up and moving aside.

A man in a red shirt, who appears to be working at the shop, immediately stands up to check what happened.

A few more passers-by slowly start to gather around as the BMW driver gets out of his car.