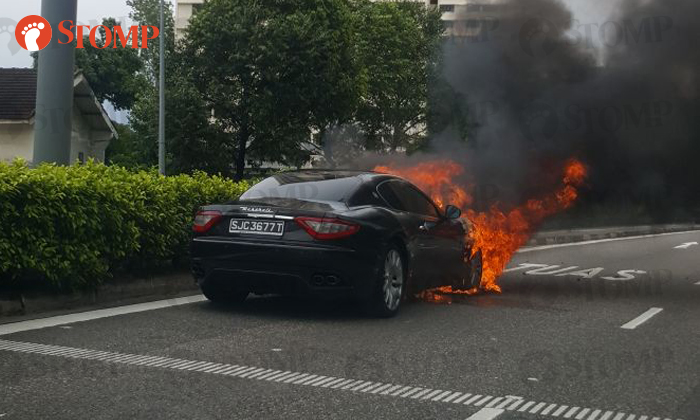 A Maserati car caught fire along the Kallang–Paya Lebar Expressway (KPE) at around 2pm today (Nov 20).

Stomper Anonymous shared with Stomp a photo of the burning vehicle, which he said has been circulating on WhatsApp.

In response to media queries by Stomp, the Singapore Civil Defence Force (SCDF) said the fire was extinguished using one water jet.

Stomp understands that the car had been travelling out of the KPE tunnel when its engine started emitting smoke.

In an advisory, the SCDF said that most vehicle fires in Singapore occurred while the vehicles were travelling on the road.

"The primary cause of these fires is due to ignition sources such as overheating and electrical faults within the engine compartment," it added.

While most vehicle fires start small, they develop rapidly due to the presence of flammables such as petrol, diesel and lubricants.

Motorists are advised to equip their vehicles with a fire extinguisher so that they can extinguish an incipient fire before it spreads.

What to do if you spot any sign of smoke emitting from your vehicle while travelling:

How to prevent your car from catching fire: