Car bursts into flames along road divider on PIE 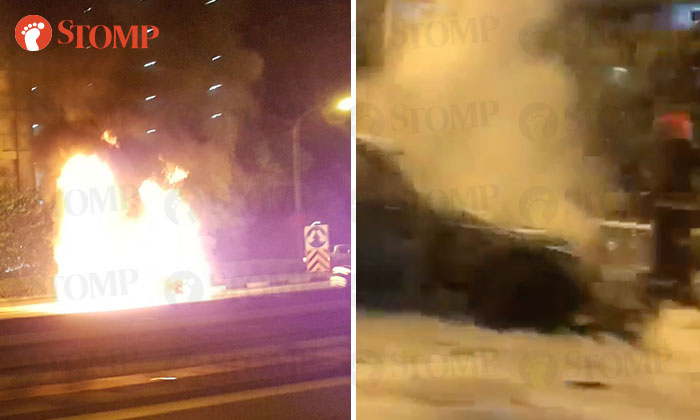 A car burst into flames along the Pan Island Expressway (PIE) towards Changi Airport , near the Paya Lebar Exit today (Aug 5) at around 6.20am.

Stomper Jason, Xuelin, and Zai alerted Stomp to the incident.

In the video contributed by Jason, a stationary car along a road divider of the expressway appeared to be on fire; a thick plume of black smoke could be seen.

Jason also said that he saw an elderly man and a woman near the burning vehicle.

In another video sent by Xuelin, police and Singapore Civili Defence Force (SCDF) officers were already at the scene, and the fire has been put out, leaving a badly charred vehicle.

“SCDF was alerted to a vehicle on fire at around 6.20am along PIE towards Changi Airport, near Paya Lebar Exit.

“SCDF dispatched one fire engine, one Red Rhino, and one fire bike to the scene.

“The fire was extinguished with one waterjet.”

Stomp understands that no one was hurt in the incident.