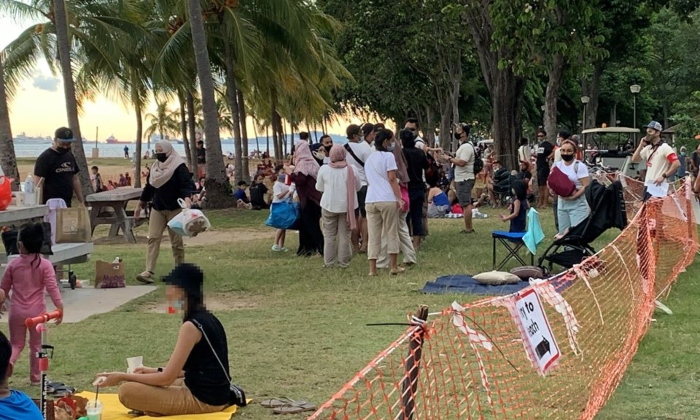 Photos of large groups gathering at the beaches of East Coast and Sentosa over the weekend have surfaced on social media and sparked concern.

The series of photos shared online also included a post that a Stomper alerted Stomp to, which shows more than 15 people crowded together at East Coast Park.

“FDW having parties at East Coast on 19 July around 1.20pm. Some holding portable karaoke microphones walking around singing like Celine Dion.”

A caption accompanying the post said that the group was "having parties" on July 19, at around 1.20pm.

Environment and Water Resources Minister Masagos Zulkifli has since spoken out to remind citizens to be socially responsible "in the midst of a long battle with the COVID-19 pandemic".

Reminding everyone to be mindful and stay vigilant, the minister also shared his concerns "that some complacency may be setting in, at a time when we must keep our guard up".

Many of us enjoy meeting and hanging out with friends and family members, and we miss how we used to be able to do this...

Mr Masagos, who shared photos of large groups congregating, said: "The beaches at East Coast Park and Sentosa were extremely crowded over the past weekend.

"Our Safe Distancing Ambassadors and Enforcement Officers encountered many groups comprising more than ten people who were from extended families, or were friends congregating.

"A good number didn't wear masks even when reminded saying they were eating or drinking."

Mr Masagos also said that the National Parks Board (NParks) has taken crowd control measures since early July, by segmenting the more popular beachfronts at East Coast Park and temporarily closing selected sections when these get too crowded.

"We will be stepping up our enforcement," he added.

"COVID-19 remains a threat and we must continue to be socially responsible."

Members of the public are also reminded to keep their masks on at all times, except when eating, drinking or engaging in sports.

Mr Masagos further reminded: "Keep within a group size of no more than five people and maintain a safe distance of at least one metre from other groups. Do not intermix between groups at parks, beaches and other public spaces.

"To help with contact tracing efforts, please do scan the SafeEntry QR codes set up at designated entry points at parks and along beachfronts before entering these spaces.

"I seek everyone’s cooperation in continuing to observe these safe distancing measures during Phase 2."

The minister said that safe distancing ambassadors and enforcement officers will continue to walk the ground to advise members of the public to adhere to these measures, "and will not hesitate to issue fines on violations".

He concluded: "Let’s all do our part to keep Singapore safe."