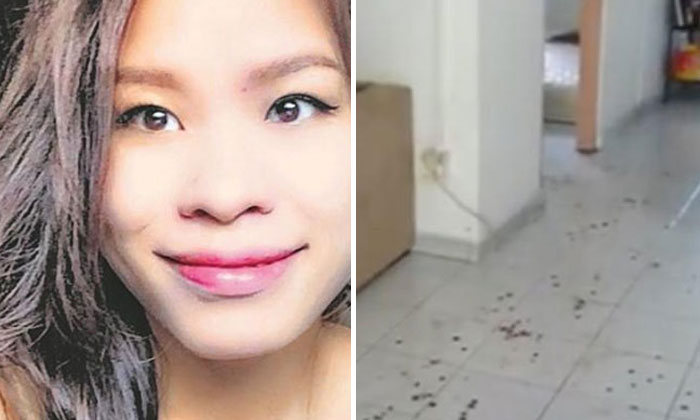 The jaded lover of  31-year-old Vietnamese bartender, Nguyen Thi Thu Trang, had struck her with a dumbbell on the head during the harrowing Marsiling murder case which happened on May 18, 2017.

The man, Ang Poh Hwa, 59, then stayed by her body for two days before dying in a fall from an opposite block, reports Lianhe Wanbao.

Police officers recovered keys to Ang's flat from his body.

They subsequently broke into Ang's home in Block 18 and discovered the body of the victim.

The victim was wrapped in a blanket while her face and head bore obvious sights of trauma.

She was pronounced dead at the scene.

An investigation revealed that the victim had been dead for approximately two days before her body was uncovered.

Ang had also attempted to slit his wrists after killing the victim but did not succeed.

He stayed with the victim's body for two days before going over to Block 17 where he fell to his death.

While examining both bodies, the coroner discovered that Ms Nguyen bore several injuries.

A blow to her head with a dumbbell broke her skull and tore her scalp, resulting in an 11cm-long gash from her forehead, extending to the top of her head.

These injuries alone would have killed her, concluded the coroner.

He also deduced that the wounds on Ang's wrists were not sufficient to cause death and he had died from the subsequent fall.

Messages uncovered from both Ms Nguyen and Ang's phones contained phrases such as 'dear, 'miss you' and 'I love you', indicating that they had been in a relationship.

However, a photo recovered from Ang's photo showed a Facebook posting by Ms Nguyen, announcing her intentions to marry her Italian fiance.

Six days before the incident, Ms Nguyen had sent another message to Ang which read:

"Don't do anything stupid.

"I will leave sooner or later.

"You have your own life and your family, so you must take care of yourself."