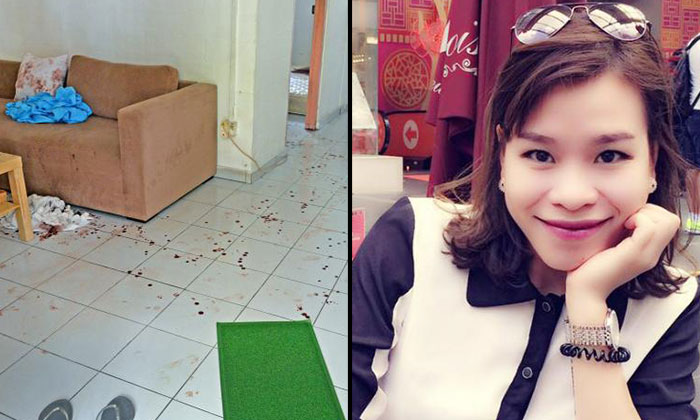 The female body found in a flat belonging to a man who was in turn, discovered dead at the foot of a HDB block in Marsiling Lane, has been identified to be a 32-year-old  Vietnamese bartender.

The incident happened on May 17, 2017, in which police had broken into the home of a 59-year-old truck driver, after he was found dead at the foot of Block 17, Marsiling Lane, only to discover the body of the female deceased on a bed in the master bedroom.

Yesterday (May 19), the woman's body was retrieved by a good friend.

The friend revealed that the victim had been romantically attached to an Italian man, and stayed in Sengkang.

She did not understand why the victim had gone to the deceased man’s unit.

Another friend said that the deceased had been a bartender for five years, and had gotten to know her Italian boyfriend though her work.

Her boyfriend had apparently returned to Italy, and the deceased parties were colleagues.

The female deceased’s 30-year-old brother said that his sister had come to Singapore to earn a living, and to support her family back in Vietnam.

He also clarified that his sister and the deceased man were not husband and wife.

A neighbour pointed that out there were many police officers at the scene of crime on Thursday morning (May 18), and that they had retrieved two knives, believed to be the murder weapons.

Reporters also observed that the unit was in a mess, and there were blood stains all over the unit, with a 4m trail leading to the bedroom where the female deceased was found.

A towel dyed red with blood was also discovered in the living room.

The younger brother of the male deceased claimed that they had not stayed in touch and he did not know the female deceased.

The last time the two brothers had met up was a few months ago, and according to the younger brother, the male deceased did not seem out of norm.

“We contact each other once in a while, but we do not talk about emotional matters.

“I did not know if he remarried or the identity of the woman.”

“We do not know much about him, nor his relationship with the dead woman.”

The male deceased’s mother expressed that he was ‘a filial son’ who visited her quite often.