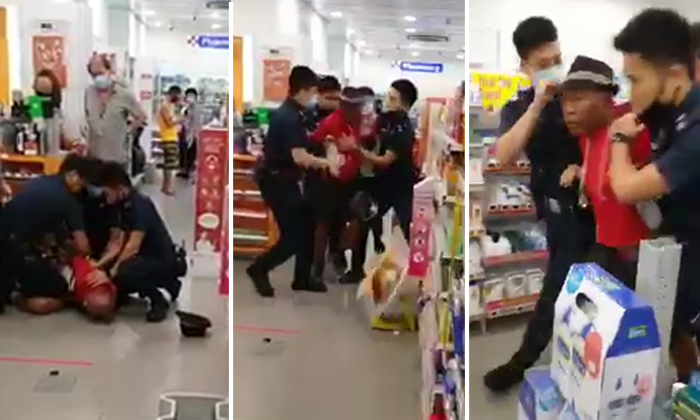 A 48-year-old man kicked up a ruckus when police officers tried to arrest him at a Guardian pharmacy in Toa Payoh on Monday afternoon (Apr 13), though rumours about him being caught flouting circuit breaker measures are untrue.

Responding to Stomp queries, the police said they received a call for assistance at Block 190 Lorong 6 Toa Payoh at 2.20pm.

The man was arrested for disorderly behaviour and shop theft.

Rumours circulating online claimed that the man was nabbed for flouting circuit breaker measures, such as not wearing a mask and not practicing social distancing, but this is false.

Stomp understands that the arrest had nothing to do with Covid-19.

A video posted by Facebook user Patrick Tan on Monday night shows the man lying on the floor as police officers tried to restrain him.

A police officer can also be seen helping to pick up a hat from the floor and placing it on the man's head.

However, the man kicked a shelf and caused items to fall on the floor when the police tried to take him away.