Elderly man who wanted to eat at void deck arrested after refusing to go home, shouting at police 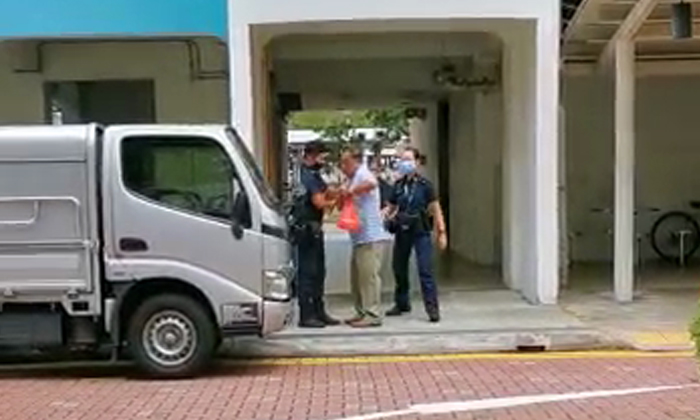 An elderly man was arrested for disorderly behaviour after refusing to heed the advice of police officers and shouting at them at Block 28 Bendemeer Road on Tuesday (Apr 7), the first day of Covid-19 circuit breaker measures kicking in.

He had wanted to eat at a table at the void deck and refused to leave, the police told Stomp.

Several Stompers alerted Stomp to a video of the incident that shows the 71-year-old man, who was holding a bag of food, being handcuffed.

In response to a Stomp query, the police said officers were on foot patrol at the block at around 11.40am when they came across a group of elderly people "gathering around two tables at the void deck".

A spokesman said: "The police officers advised them to go home and not remain at the location. The group complied and left.

"Shortly after, a 71-year-old man arrived with his packet lunch and wanted to eat at one of the tables. The officers advised him to return home to have his lunch and not loiter in public unnecessarily.

"The man refused to heed the police officers' advice and shouted at them. He remained uncooperative despite officers’ repeated advice for him to calm down and leave the place."

The man was subsequently arrested for disorderly behaviour.

The police added in their statement: "Members of the public are advised to take the circuit breaker measures seriously.

"Everyone should stay home and only go out for essential activities. Everyone must play their part for the circuit breaker to be effective."

As part of new Covid-19 circuit breaker measures that will be in effect from April 7 to May 4, dining in at food and beverage outlets are no longer allowed. However, you can still buy takeaways or use food delivery services.

All social gatherings of any size in both private and public spaces have also been banned under a new Bill passed in Parliament on Tuesday.

Related Stories
Covid-19 circuit breaker measures: What you can and cannot do for the next one month
Man smashed plate and spat on floor, shouted 'corona, corona' because hotel eatery was closed
Coronavirus: 1m safety distance, free masks among precautions by food delivery firms
More About:
Covid-19
arrest