Man allegedly used racial slur, kicked woman in the chest for not wearing mask while exercising 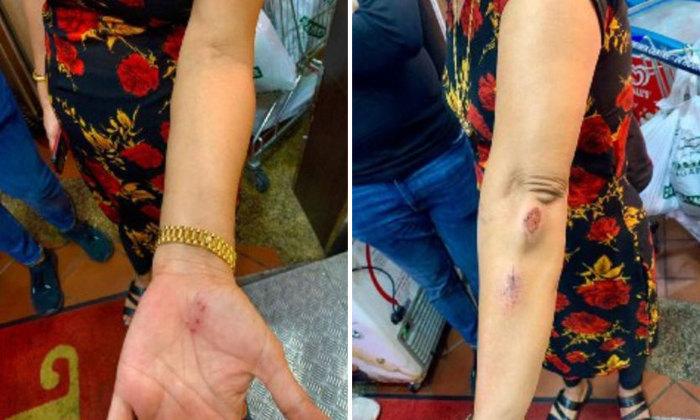 The police are investigating a case of a man who allegedly kicked a 55-year-old woman in her chest and shouted a racial slur at her for not wearing her mask while brisk walking.

The woman, private tutor Hindocha Nita Vishnubhai, was brisk walking on Friday (May 7) when she had a run-in with the man.

Madam Nita, who is an Indian Singaporean, was walking from Choa Chu Kang MRT station towards the stadium at about 8.30am on Friday when the alleged assault took place.

The mother of two adult children said she lowered her mask below her nose to prevent breathlessness as she was walking fast, dressed in a sleeveless top and track pants.

She turned around when she suddenly heard a man, whom she described as wearing a light-coloured T-shirt with dark shorts and sports shoes, shouting at her from behind. He was accompanied by a woman.

"He shouted at me to put my mask above my nose. I patiently told him that I was exercising which is why I had the mask below my nose," she said.

The man, believed to be in his late 20s, once again shouted at her to put her mask up, even though it was clear she had worked up a sweat from her walk. She tried to explain again that she was exercising.

"He then started to abuse me and even used a racial slur, I was absolutely shocked. I do not like confrontation and I wanted to avoid an argument with him, so I said 'God bless you' and decided to walk away," she added.

Madam Nita said this further frustrated the man, who was several metres away from her. He ran towards her and landed what she described as a "flying kick".

"It was a very forceful kick which caused me to fall to the ground. I kept saying 'he kicked me, he kicked me'. I was in complete disbelief," said Madam Nita, who is about 1.6m tall and weighs 60kg.

She sustained scratches on her arms and hands from the fall.

The woman with the man did not intervene during the incident and the couple ran away after she fell to the ground, Madam Nita added.

A bystander who had witnessed the incident from a nearby bus stop rushed to her aid, helping her get up and offering plasters to stem the bleeding from the scratches.

"I know I should have taken down the kind woman's number, but in that moment, all I could do was escape from the situation. I was in a state of shock and I did not know how to react. I could not even get a photograph of my attacker," Madam Nita said.

After narrating the incident to her husband and two children, aged 26 and 27, Madam Nita filed a police report regarding the incident on Friday night. On Monday, she said she would be going to a polyclinic after work to have her injuries checked by a doctor.

In response to queries from The Straits Times, the police confirmed a report has been filed regarding the incident and they are investigating the case.

ST understands the man is being investigated for voluntarily causing hurt and harassment.

According to current regulations, individuals can remove their mask when engaging in strenuous exercise but must put the mask back on once this is completed.

Madam Nita said the incident has left her afraid of taking the route, which she has frequented for more than a year now.

"I made up my mind to walk only on the opposite side of the street, even though it does not have a rain shelter. I could not understand why the man would act so violently towards me," she said.

A similar incident reportedly took place at Pasir Ris on May 2, when a man was caught on camera shouting at a family of Indian expatriates and accusing them of spreading Covid-19.

The online video shows that the man, believed to be Singaporean, used derogatory terms against the family of four and asked them to "go back" and said they were "spreading the virus here".

ST has contacted the police for more information about that incident.