Men hurl vulgarities at SDA at Lau Pa Sat, insist group of more than 5 people is ok with 2 tables 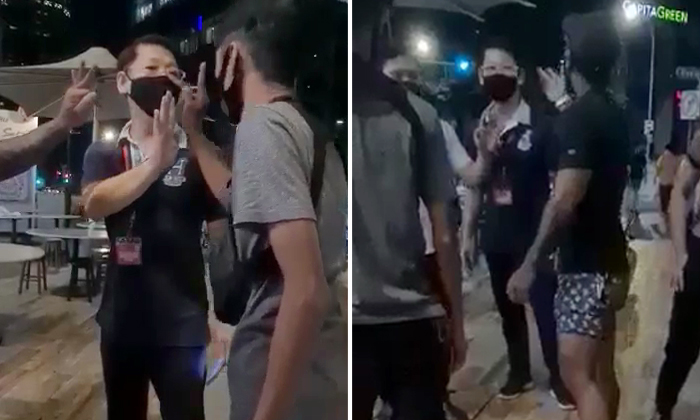 The police are investigating a case of verbal abuse of a public servant performing his duties as a safe distancing enforcement officer following a late night altercation at Lau Pa Sat.

A video that went viral on Sunday (May 9) showed two men gesturing and hurling vulgarities at the officer outside a restaurant at 18 Raffles Quay.

Police said no one was injured during the dispute, which they were alerted to at 10.16pm on Saturday.

The incident involved a group of people who were told by the officer that they could not gather in a group of more than five.

Stricter rules limiting gatherings to five, compared with eight previously, kicked in on Saturday, following a spike in community cases here. The new rule is in place until May 30.

A three-minute long video of the incident was uploaded on Facebook group "COMPLAINT SINGAPORE" on Sunday and showed the enforcement officer explaining that they cannot "accept more than five people".

He could be seen asking the group to listen to him as he explained social distancing rules, but a member of the group shouted: "Who are you to ask me to listen to you?"

Members of the group could be heard saying that they were seated at two tables.

"You don't make sense at all," another man told the officer.

The officer is later seen backing off and standing with at least three other social distancing ambassadors, while members of the group continued to gesture at him up-close.

Last June, a man was arrested after he was allegedly violent towards two safe distancing ambassadors at Compass One shopping mall.

In April last year, a man was charged with using criminal force to deter a public servant from discharging her duty, after he allegedly hit a safe distancing ambassador's hand when he was advised not to loiter.