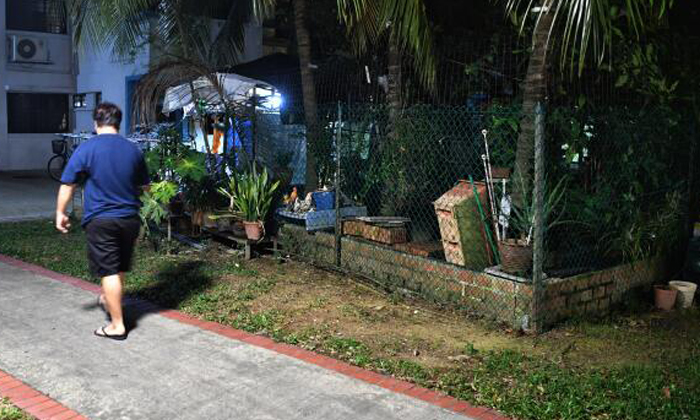 Upset that his wife was having an affair with a colleague, he pushed her to the ground before raining blows on her as she lay curled up on the concrete.

The woman soon stopped breathing, and was later pronounced dead at the hospital.

On Tuesday (Feb 15), Cui Huan, 25, a Chinese national, was sentenced to seven years' jail and nine strokes of the cane.

He pleaded guilty to one count of causing grievous hurt and thereby causing death.

She was three years older than him, and they have a young child together.

In October 2019, the couple came to Singapore to work for Deli Hub, a catering service under the Neo Group.

They lived separately in flats in Boon Lay and Jurong West, as was company policy.

Cui worked at the store, while Ms Liang worked in the food processing department.

They would usually meet on their days off or after work.

But around March and April 2020, the couple began meeting less often because of different working shifts.

Around June that year, Cui began to suspect that his wife was having an affair with a colleague, Mr Wang Xilai, 28, who worked in the food processing department.

At about 1pm on Aug 27, 2020, Cui saw Ms Liang leave Deli Hub's premises on her bicycle, so he went into the premises to look for Mr Wang, but could not find him.

Disappointed, he cycled to the block in Boon Lay where his wife lived to see if he could catch her cheating on him, but she was not home.

He waited till about 6pm at a nearby park before heading to Boon Lay Shopping Centre, where he spotted his wife cycling home.

He caught up to her and snatched her phone, but was unable to unlock it.

Shortly after, at Ms Liang's block in Boon Lay, Cui grabbed her hand and used her finger to unlock the phone.

They struggled and she bit him on the shoulder.

Cui walked to a nearby park while checking the phone, and found messages that proved that Ms Liang was indeed having an affair with Mr Wang.

She admitted to cheating, but asked him in Mandarin: "What can you do?"

He asked her if she was being fair to him, to which she replied: "So what?"

Cui became enraged, and grabbed Ms Liang, pushing her to the ground.

She fell and the back of her head hit the concrete ground.

As she lay curled up in a foetal position with her hands covering the back of her head, Cui rained blows on her, kicking her three or four times in the back of the head and neck.

He also bent down to punch her on the back of the head.

He only stopped the attack when a passer-by shouted at him.

He then shouted at his wife in Mandarin: "You just wait for me to go back to China to divorce you."

Cui then ran to his bicycle and rode off.

Responding to a call, the police arrived at about 6.35pm, and found Ms Liang not breathing. She also had no pulse.

She was taken to Ng Teng Fong General Hospital and pronounced dead at around 10pm.

Meanwhile, the police found Cui at about 7.45pm at his home in Jurong West and arrested him.

An autopsy concluded that Ms Liang had died from bleeding in the brain, which was caused either by the fall, or the kicks and punch to her head and neck, or a combination of the two.

In mitigation, Cui's lawyer, Mr John Koh, said the incident arose primarily because of the discovery of the adulterous affair.

"The incident had broken out in hot blood," he said. "But it was not without provocation."

He said that when confronted by Cui, Ms Liang had shouted: "I went to a hotel room to have sex with Xilai. What can you do about it?"

The defence asked for a sentence of not more than five years' jail and nine strokes of the cane, adding that Cui did not think at the time that pushing Ms Liang to the ground would lead to her eventual death.

District Judge Ronald Gwee backdated the sentence to the day of Cui's arrest on Aug 27, 2020.

For voluntarily causing grievous hurt, Cui could have been jailed for up to 10 years and also fined.

Related Stories
24-year-old man charged with murder of wife in Boon Lay Place
Man who stabbed wife 13 times as he believed she was having an affair gets 10 years' jail
Jail for woman and ex-lover who plotted to kill her husband by sabotaging his car
More About:
affair
dispute
couple
court