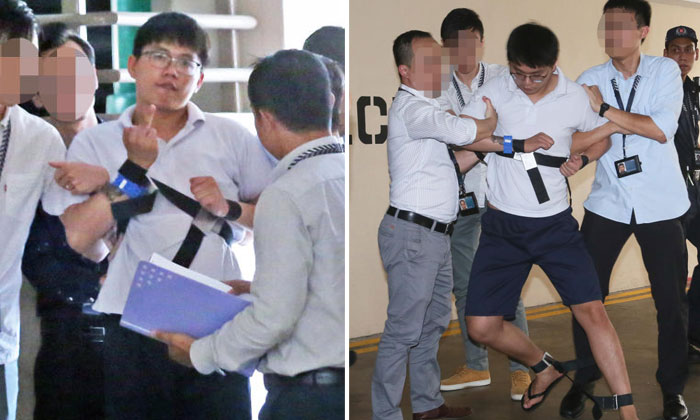 A 23-year-old man who was accused of stealing more than $35,000 worth of jewellery from a Yew Tee Square store was taken back to the crime scene on Thursday afternoon (Dec 20).

According to The Straits Times, Toh Xin Ann was seen struggling with police officers at the scene.

It was previously reported that he made off with the jewellery, which included three gold necklaces and a pendant, after he visited Gold Scale Jewels at Block 624 Choa Chu Kang Street 62 around 4.30pm last Saturday (Dec 15).

The police said they were alerted to the incident about 15 minutes later.

Following an investigation and information received from a member of the public, officers from Jurong Police Division arrested Toh on Monday.

When The Straits Times arrived at the scene at around 3pm on Thursday, Toh was inside a police car.

He was later taken to a stairwell near the jewellery store by police officers and they spent about 10 minutes there.

Thereafter, Toh spoke to the officers when they were about 15m away from the shop and he struggled as they led him away at around 3.30pm.

Toh, who had not been offered bail, is now remanded at Woodlands Police Division. He will be back in court on Dec 26.

If convicted of theft, he can be jailed for up to seven years and fined.