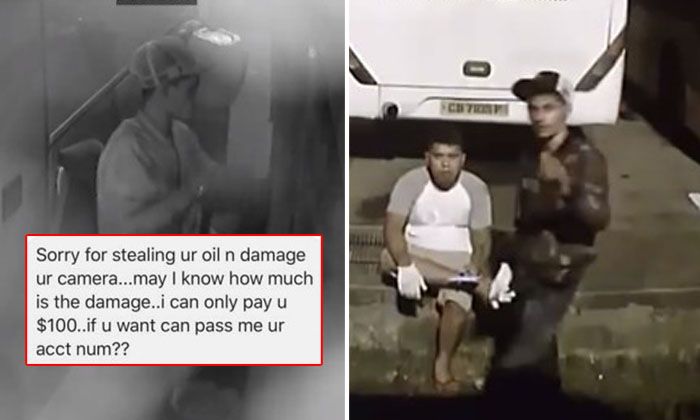 Two youths allegedly stole diesel fuel from a lorry in Jurong Road Heavy Vehicle Park, in the area of Bukit Batok, on Nov 30.

A Stomper alerted us to the videos of the youths captured by surveillance cameras placed around the lorry, which were posted on Facebook by user Jason Tan on Dec 8.

The caption of the post said: "To this driver of a white van, you come to my lorry and steal diesel and now u got ur friends into trouble, nowadays camera a lot don’t do stupid thing."

According to Lianhe Zaobao, Mr Tan Jian Zhong, the boss of a construction company and Jason Tan's younger brother, said that the lorry parked at the carpark was one of 16 lorries that their company uses to transport soil.

He said that the youths took about 40 minutes to acquire the diesel using a pump.

Mr Tan said that the following day (Dec 1), the driver of the lorry discovered that the fuel tank was almost empty.

Stomp understands that one of the surveillance cameras on the lorry had also been damaged.

A police report was then lodged.

In response to a Stomp query, the police said: "The police confirmed that a report was lodged and investigations are ongoing."

Mr Tan said that many years ago, one of the lorry's windows was smashed in by a thief, who stole about $600 worth of property.

Since then, Mr Tan installed four surveillance cameras for each side of all the 16 lorries

"I spent over $20,000 on the cameras, in case I needed evidence for anything. In this incident, they have come in extremely handy."

He posted three videos on Facebook, the first showing the diesel allegedly being stolen at 1.21am, according to the timestamp on the footage.

In the first video, a man in a hat and his alleged accomplice walk beside the lorry, while emptying two big bottles.

The man in the hat walks forward and can no longer be seen in the video.

Soon after, the latter wearing the watch leaves.

In the next video, which was taken at about 1.31am, the man wearing the watch is seen sitting on the kerb using his phone.

Then, a white van enters the lot, and the man in the hat emerges from it.

At about 1.49am, in the third and final video posted, the man in the hat walks towards his alleged accomplice sitting by the kerb.

The man sitting points at the camera, and seems to alert the former about it.

The former seems to ignore the presence of the camera, and walks to the side of the lorry again.

In a separate Facebook post on Dec 11, Mr Tan's older brother, Facebook user Jason Tan, posted a screengrab of a message he apparently received from one of the alleged thieves.

The message said: "Sorry for stealing your oil and damaging your camera...

"May I know how much is the damage...

Jason's screengrab does not show his response, but he wrote in the caption of his Facebook post: "Bro, you must be a joker."