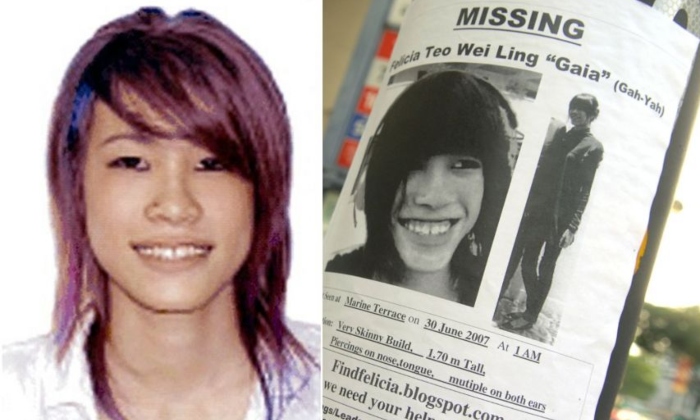 A man will be charged on Thursday (Dec 17) with the murder of a female arts student more than 13 years after her disappearance.

The 35-year-old man is believed to have worked together with another man to dispose of the body of Ms Felicia Teo Wei Ling, who was 19 when she went missing after attending a house gathering at Marine Terrace.

The man was arrested on Tuesday.

The police said in a statement on Thursday that they are searching for the other man, 32, who they believe is not in Singapore.

They are also searching for Ms Teo's remains.

"Preliminary investigations revealed the Felicia had died before the report was lodged on July 3, 2007," said the police, referring to the missing persons report lodged by Ms Teo's mother.

Ms Teo and the two men were believed to be friends, and the 19-year-old was believed to be last seen entering a lift with the duo at a Housing Board block in Marine Terrace in June 2007.

However, in interviews with the police then, both men had maintained that Ms Teo left the flat of her own accord in the wee hours of June 30 that year, said the police statement.

The police said they conducted extensive investigations, including searching the unit and closed-circuit television footage around the vicinity of the unit, but did not find anything incriminating.

The case was classified as a missing persons case, as the police did not find any facts to link the two men to her disappearance, the statement added.

After a review in July this year, the case was referred to the Criminal Investigation Department (CID), "given that the case has been unsolved for an extended period of time".

The police added that this is part of a process where selected cases that have been outstanding for a "protracted period of time" are surfaced to the CID for review.

A breakthrough came after the CID uncovered new leads while tracing the properties that were believed to be in Ms Teo's possession when she was reported missing, said the police. Media reports then said Ms Teo had her mobile phone and laptop with her, among other items, when she vanished.

The CID had managed to link one of the properties to the 35-year-old suspect, and he was arrested, said the police.

Director of CID, Senior Assistant Commissioner of Police How Kwang Hwee, said: "I would like to commend the investigators for their hard work and determination to solve the case. The investigators managed to uncover new leads to throw light on what might have happened to the victim, identify the suspect and arrested him."

Ms Teo's case had triggered a nationwide search back in 2007, and attracted a lot of media attention.

Over 200 of her family and friends launched a frantic hunt for the then student of Lasalle College of the Arts, distributing thousands of fliers bearing her photograph.

They combed areas like Geylang, Yishun and Woodlands, and even extended their search to Johor Baru, where they spent a day showing photos of Ms Teo to strangers and asking if they had seen her.

If charged and convicted of murder, the man will face the death sentence.