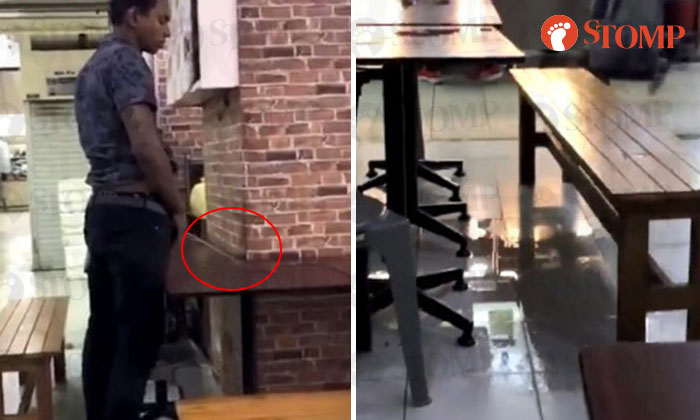 A man started urinating on a table after a meal at an eatery in Orchard Towers basement 1 yesterday (Feb 4) at around 10.30am.

Stomper Jiang who works in a shop near the vicinity alerted Stomp to the incident.

According to Jiang, the man had come into the eatery earlier, gotten some dishes from an economic rice stall but did not pay.

He proceeded to eat the food.

Jiang asked the stall assistant why she did not confront the man for payment but was told that she wanted to avoid trouble.

She also told Jiang that calling the police would not help since the man would have gotten away by the time the officers reached the scene.

When the man was done with his meal, he suddenly stood up, walked over to a table in a corner and started peeing.

“As if he suddenly forgot about paying the first time around, he suddenly grabbed his wallet and went back to pay."

The man then went back for the second round of food.

When the stall assistant refused to attend to him, he helped himself to the food and moved them back to his table to eat.

Only after eating did he finally leave.

Said Jiang: "He didn’t look drunk at all.

"I was taken aback when he suddenly whipped out it out and started peeing. I hope the videos serve as evidence of his wrongdoings."

Related Stories
Seriously? 'Pretty woman' does her business right by the roadside
American man gets caught openly urinating on sleeping woman in airport
Boy seen relieving himself in full view of other diners beside restaurant at Ang Mo Kio Ave 3
More About:
inappropriate
peeing
unhygienic