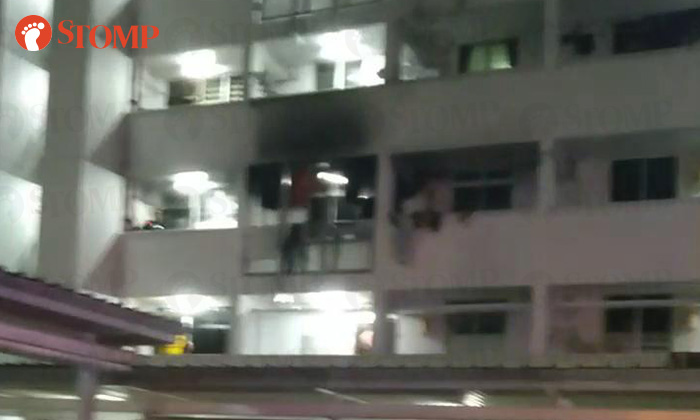 A man was conveyed to hospital for burn injuries after a fire at 30 Balam Road was put out by members of the public at about 9.35pm last night (Sep 25).

Stomper A, who resides on the seventh floor in the same block, contributed a video of the scene of the incident.

Stomper A said: "I was on my way home when I saw the fire engine lights and went downstairs to take a look. There wasn't any siren.

"I don't know the people who live in that unit. I was shocked.

"I went to level four to take a close look and it was smoky, so was level three.

"By the time I went down to the ground floor, the fire was extinguished and I saw the firefighters go into the unit and bring out a casualty."

Responding to a Stomp query, the Singapore Civil Defence Force (SCDF) said: "SCDF responded to a fire in a third-floor unit at 30 Balam Road at about 9.35pm on Wednesday (Sep 25).

"The fire, which involved the contents of living room, was extinguished by members of the public prior to SCDF's arrival.

"A man was evacuated by SCDF firefighters and conveyed to Tan Tock Seng Hospital for burn injuries and smoke inhalation.