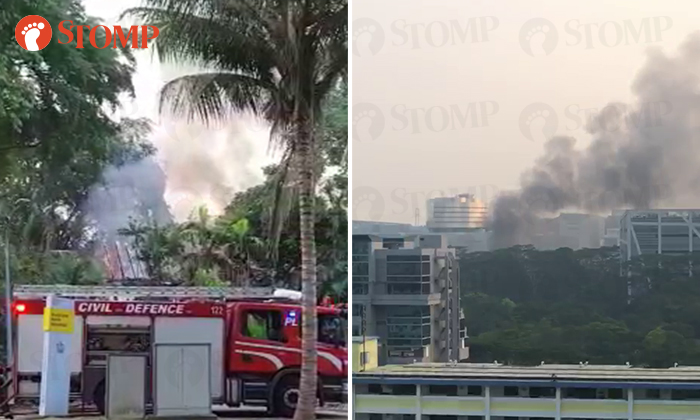 Stomper Tham and Sam contributed videos of the fire.

Bright, orange flames can be seen as columns of smoke rise through the air.

Several fire engines can also be spotted in the video.

Smoke from the fire could be seen from Stomper Sam's house in North Buona Vista.

Sam said: "I saw huge black smoke when I was looking out of a window from my house at about 6.15pm.

"The smoke went on for about 20 minutes."

Responding to a Stomp query, the Singapore Civil Defence Force (SCDF) said: "At about 6pm on Sep 21, the SCDF was alerted to a fire at 1 and 2 Wilton Close.

"SCDF resources arrived within seven minutes from the time of call. The fire was raging and burning through the roof.

"SCDF swiftly deployed four water jets to prevent the fire from spreading. The fire was extinguished at about 6.40pm.

"A total of eight emergency vehicles and 22 firefighters were deployed to the incident.

"Occupants of the houses had self-evacuated prior to SCDF’s arrival. There were no reported injuries.

"Damping down operations and fire investigations are ongoing."

According to the SCDF, damping down involves applying water to wet burnt surfaces immediately after a fire has been extinguished. This prevents any rekindling of fire from hot burnt surfaces.

Related Stories
Fire breaks out at open grass patch in Jurong: 'So smoky, thought it was haze'
Smoke emits from Volvo as it catches fire in Balestier
Prime mover bursts into flames on CTE
More About:
fire
scdf