Man swings punch at cabby and tries to kick him in Clarke Quay, police investigating 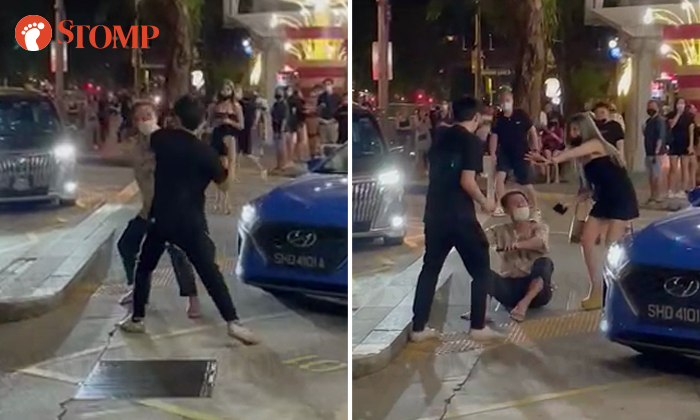 A man was caught on camera punching a taxi driver and causing him to fall onto the ground during a dispute in Clarke Quay on Wednesday night (April 14).

Stomper Anonymous witnessed the incident that occurred at a taxi stand along River Valley Road at around 10.36pm, and shared a video with Stomp.

She recounted: "The youth was provoking the cabby. He was shouting out loud and punching the taxi mirror.

"When the cabby rolled down the taxi window, the youth reached in and hit him.

"He then shouted at the cabby, 'Not happy come down one on one!' before walking off.

"But a few seconds later, the cabby came out of his taxi and the youth ran towards him as seen in the video. The youth threw the first punch and the cabby fell to the floor."

In the video, vulgarities can be heard as the youth runs towards the cabby and swings a punch at him, causing him to fall onto the ground.

A long-haired woman in black can be seen rushing forward and putting her hand out to stop the youth.

The cabby then picks himself up and the youth tries to kick him, but misses.

Another woman can be heard shouting a string of Hokkien and English vulgarities that appear to be directed at the youth.

Anonymous said: "I'm not sure what the dispute was about, but I think the taxi driver called the police because he remained at the scene. The security guard also came out. I left first as my ride had arrived."

Related Stories
2 men taken to hospital after fight involving chopper in Yishun, including 1 who is arrested
10 men arrested after fight breaks out between 2 groups at Clarke Quay
Fight breaks out after drinking session escalates into 'private settlement' in Woodlands
More About:
cabby
taxi driver
fight
dispute
argument