2 men taken to hospital after fight involving chopper in Yishun, including 1 who is arrested 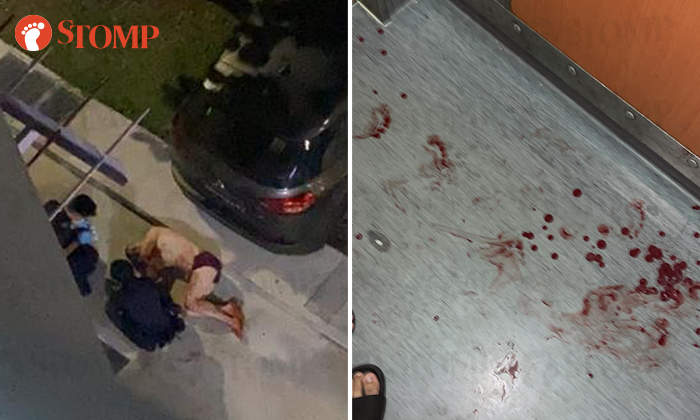 A 40-year-old man was arrested for voluntarily causing hurt by dangerous weapon after a fight that occurred in Yishun in the wee hours of Saturday (April 10).

In response to a Stomp query, the police said they were alerted to a fight at Block 722 Yishun Street 71 at 2.59am.

Two men, aged 36 and 40, were conscious when taken to hospital.

Stomper Tony, a resident at the block, said one man had gotten stabbed with a chopper.

Photos that Tony sent to Stomp show a man lying on the ground at the foot of the block while paramedics attended to him.

Bloodstains can also be seen in a lift and on a car.

Tony told Stomp: "There were two men shouting at each other. My son went over to the lift lobby and saw both men struggling with a chopper in the lift.

"One of the men later leaned against my car and left bloodstains on the boot. Fortunately, no glass was broken and nobody died."

It is unclear what the two men were fighting about, Tony said.