Man spits at bus, hurls vulgarities at driver after refusing to wear mask: 'I'll make you lose your rice bowl' 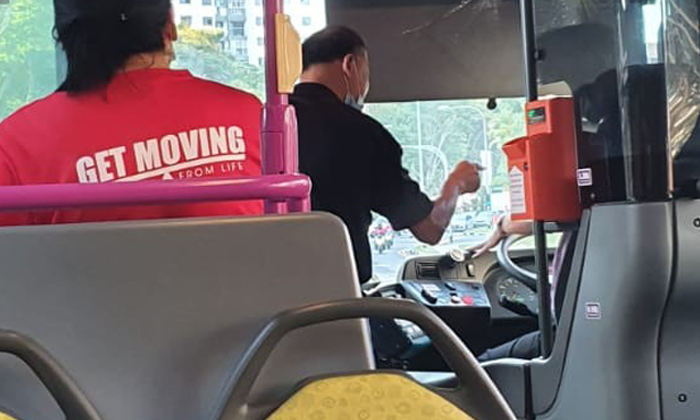 Transport operator SBS Transit has lodged a police report against a man who verbally abused a bus captain after refusing to put on his mask properly despite repeated reminders.

According to Shin Min Daily News, the incident occurred on bus service 54 while it was stopped at the bus stop of Block 245 Bishan Street 22 on Saturday (Aug 8), at 6.19pm.

Ms Wang, 28, said she had just boarded the bus when she saw the bus captain approaching a middle-aged uncle, who was seated at the back.

The bus captain asked the uncle to put on his mask properly.

Ms Wang recounted: "I heard the bus captain say that this was already the third time. He asked the uncle if he wanted to wear his mask properly and if not, to alight from the bus."

However, the uncle refused to comply.

The bus captain then walked back to the driver's seat and called his headquarters to inform them about the incident.

This apparently upset the uncle, who went up to confront the bus captain.

Ms Wang said this went on for around eight minutes, adding that the uncle left only when the bus captain said he would call the police.

She told Shin Min: "Before the uncle left, he even told the bus captain, 'Do you believe that I will make you lose your rice bowl?'

"After getting off the bus, the uncle kept insulting the bus captain. He hurled vulgarities, flashed his middle finger and spat twice at the bus."

In response to Stomp queries, Ms Tammy Tan, senior vice president of corporate communications at SBS Transit, said: "Our bus captain was merely doing his job by asking the commuter to wear his mask - which is mandatory by law during this COVID-19 situation.

"In this case, he had to repeatedly advise the man to do so as the man kept taking it off.

"When the bus captain reported the incident to our operations control centre for assistance after the fourth instance, the man approached him, hurled vulgarities and threatened the bus captain before alighting from the bus.

"We do not take this incident lightly and have filed a police report against the man for breaching current regulations and for verbally abusing our bus captain."

Ms Tan said that SBS Transit will be sharing the relevant CCTV footage with the police.

She added: "We ask that passengers treat our staff with civility. Bus captains are frontline staff who come into contact with many strangers every day and they, like many other frontline personnel, deserve better treatment."

Commuters are also reminded that it is mandatory to wear a mask when travelling on public transport.

Related Stories
Woman who spat on KFC employee, cursed her and 'whole family to die' gets charged in court
'Sovereign' woman accused of failing to wear mask in public faces two additional charges
Video of auntie repeatedly spitting on bus seats will gross you out to the max
More About:
Bus
dispute
Covid-19
SBS Transit