Woman who spat on KFC employee, cursed her and 'whole family to die' gets charged in court 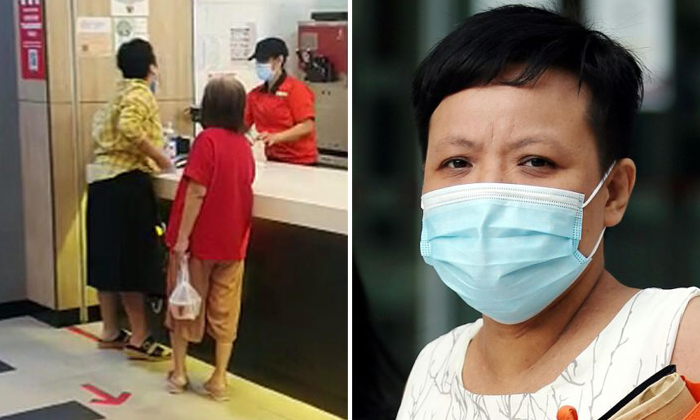 A woman who allegedly pulled down her mask and spat at an employee at a KFC outlet was charged in court on Wednesday (June 10).

Lin Si Ting, 42, was charged with intentional harassment, use of criminal force, and breaching safe distancing measures, the police said in a statement on Tuesday.

Court documents said that on April 22, Lin, who also hurled verbal abuse at KFC employee Beniga Analou Gomez in Nex mall, had shouted: "Wait for you to die, wait for your whole family to die."

Police had earlier said that the woman was unhappy after she was told by Ms Gomez to wait for her order. They had arrested Lin on April 24 after investigations.

Lin's case has been adjourned for a pre-trial conference on July 1.

The incident first made headlines when a video surfaced of a woman dressed in a yellow shirt lowering her mask and spitting at a masked employee across the counter.

A KFC spokesman said in April that the outlet had been sanitised after the incident.

The offence of causing intentional harassment carries a fine of up to $5,000, a jail term of up to six months, or both.

Lin can also be jailed for a maximum of three months, or fined up to $1,500, or both, for using criminal force on a person.

The police said they take a serious view of such abusive and irresponsible behaviour, especially amid the Covid-19 pandemic.

"Everyone needs to play their part by being socially responsible, observing good personal hygiene, and being considerate to others, especially to service staff who continue to serve the public to the best of their efforts during this difficult period," said the police.

Related Stories
Arrested: Woman who cursed and spat at KFC employee after being told to wait for her order
Woman shouts and spits at KFC staff manager at Nex, police investigating public nuisance
More About:
KFC
Covid-19
court