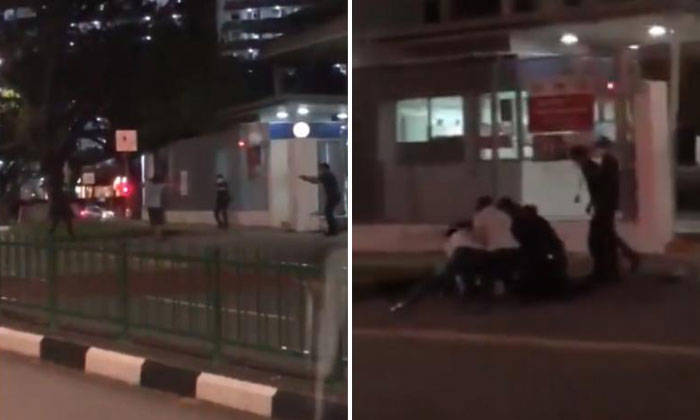 A man who was shot in the left arm by a police officer in Clementi after he charged forward with a knife earlier this year has been handed three new charges.

On Thursday (May 26), Soo Cheow Wee appeared via video link before a district court to face fresh charges of punching an Aetos officer in June 2019, as well as committing a rash act and breaching a personal protection order last year.

Soo, who now sports a shaved head, told the court that he intends to plead guilty and is applying for legal aid.

Details of the incident, which happened at the Kampong Java Neighbourhood Police Centre, were not stated in court documents.

On Sept 16 last year, Soo also allegedly breached a personal protection order that a woman took against him for family violence.

He is said to have thrown an aerosol can at the same woman in a unit in Clementi.

His third charge, for allegedly committing a rash act, is in relation to the same incident.

The Straits Times is not naming the woman to protect her identity.

Soo was shot during a stand-off with police officers outside Clementi Police Division in Clementi Avenue 5 on Feb 17 this year.

He had allegedly charged towards one of the officers while brandishing a knife.

Minutes prior to the incident, he is said to have slashed a 41-year-old man with a knife near Block 420A, Clementi Avenue 1.

If convicted of slashing another man with a knife, Soo can be jailed for up to seven years and fined or caned.

For voluntarily causing hurt to a public servant in the discharge of his duty, Soo can be jailed for up to seven years, fined, caned, or any combination of these punishments.

For breaching a protection order, offenders face a fine of up to $2,000, a jail term of up to six months, or both.