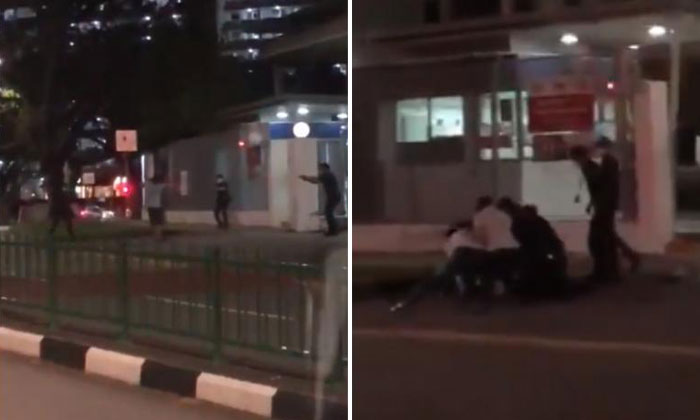 A man was shot during a confrontation with police officers outside Clementi Neighbourhood Police Centre, in Clementi Avenue 5, on Thursday night (Feb 17).

In a video posted at around 11pm by netizen Benny Tan, a man was seen walking across the road towards three uniformed police officers, holding a knife in his right hand.

As he raised his hand and lunged towards one of them, a shot rang out and he staggered before collapsing on the ground.

About eight men, including several uniformed officers, rushed towards the fallen man in the video, which had been filmed from a passing vehicle.

In an updated statement on Friday (Feb 18) morning, the police said they arrested a 49-year-old man for his suspected involvement in a case of criminal intimidation and voluntarily causing hurt with a dangerous weapon.

They said that on Thursday at about 8.40pm, they were alerted to a case where a 41-year-old man was allegedly assaulted by a 49-year-old man with a knife along Block 420A Clementi Avenue 1.

The victim suffered injuries on his right arm and wrist, and was taken to the hospital. Preliminary investigations revealed both men did not know each other.

The police said the 49-year-old man then boarded a taxi to Clementi Police Division and was seen holding a knife and standing outside the police station.

On duty police officers approached him and he was shouting incoherently.

Despite the officers’ repeated instructions to drop the knife, the man refused to comply and charged towards one of them.

As there was imminent threat to the officer, he fired one shot at the man with his service revolver.

The man suffered a gunshot wound on his left arm and was detained by the officers.

He was taken conscious to the hospital and is in a stable condition.

He will be charged on Friday with criminal intimidation and voluntarily causing hurt with a dangerous weapon.

Those convicted of criminal intimidation can be jailed for up to two years or fined or both.

Those convicted of voluntarily causing hurt with a dangerous weapon can be jailed for up to seven years, or with a fine, or with caning.

He said: “The officer assessed that his life was in imminent danger from the knife-wielding man and therefore opened fire. The officers ensured that the threatening situation was brought under control quickly with no danger to the public.

“Police officers risk their safety on a daily basis and this incident showed that officers have to react to the evolving situation quickly to prevent further harm to the public, while using the appropriate level of force.”

When ST arrived at the scene before midnight, police officers were placing evidence cards on the ground at the entrance of the police station.

Traffic Police officers were also directing traffic away from the location.

The evidence cards were removed at about 12.10am, and police officers removed police tape from the site. 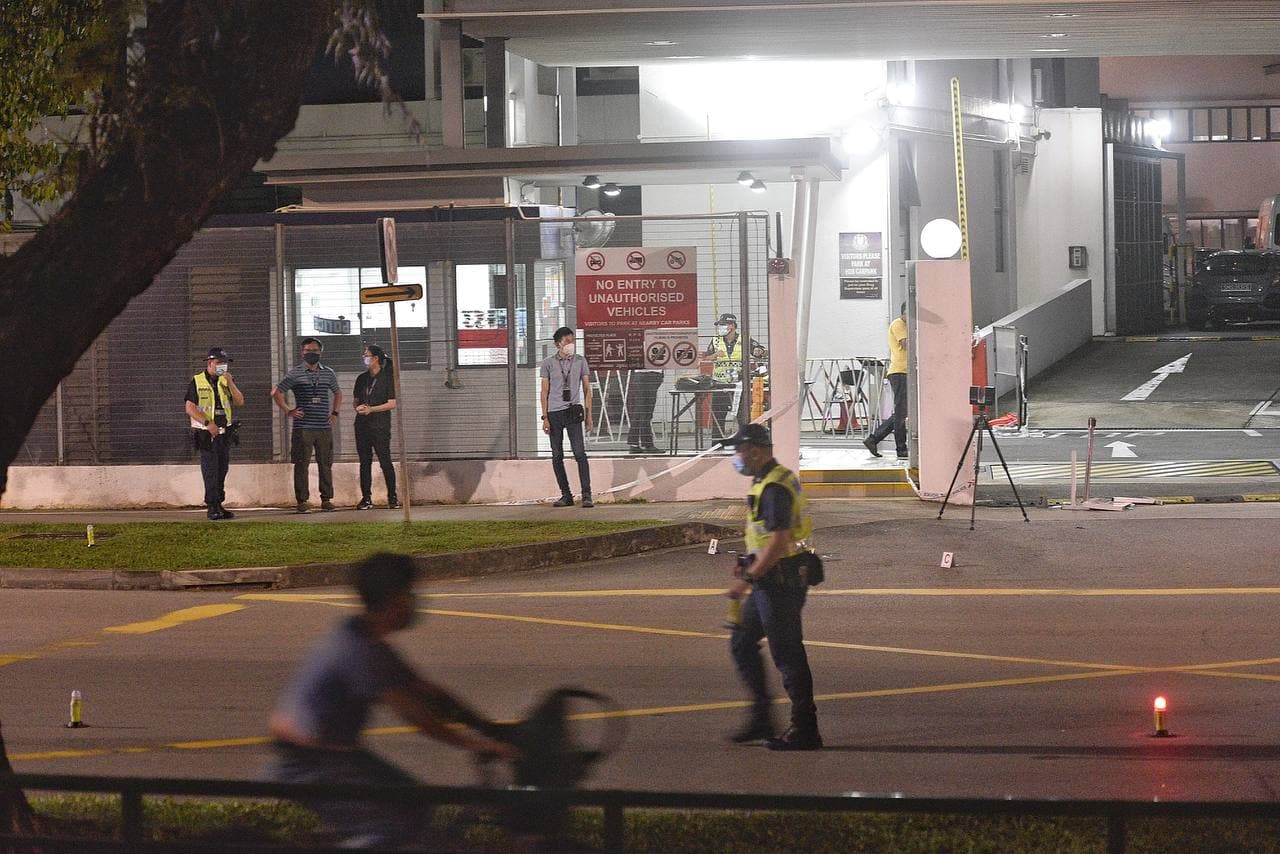 Evidence cards placed on the ground at the entrance of the police station after the incident. ST PHOTO: DESMOND WEE

The last time a police officer shot a man was during a raid at an apartment at 235 Balestier Road on Nov 5, 2020.

The man was shot in the abdomen after he assaulted an officer and tried to grab the revolver of a second officer.

It was reported then he was in stable condition.

Related Stories
Man, 62, slashes son, 25, with kitchen knife after argument in at Serangoon home
5 arrested for rioting with deadly weapon after man gets assaulted with knife in Buangkok
Man arrested for allegedly having knife at Clementi coffee shop
More About:
police
knife
attack
gunshot
clementi