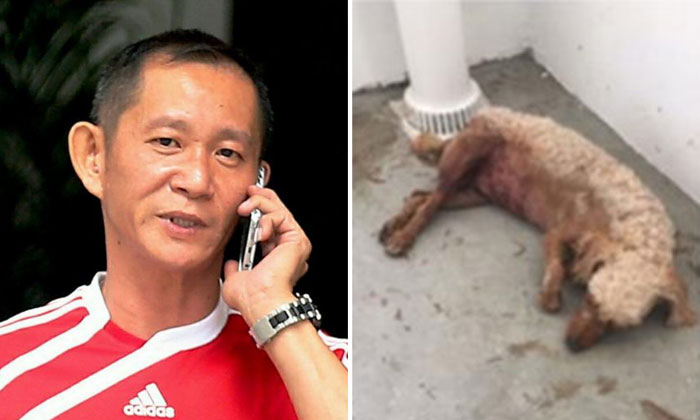 A man was sentenced to 20 months in jail and banned from owning any animals for 12 months, for animal cruelty and pet abandonment that led to the deaths of two dogs.

The Agri-Food and Veterinary Authority of Singapore (AVA) said in a media release that it was alerted to a case of alleged animal cruelty on Nov 23, 2016, where a toy poodle named Brownie died after sustaining multiple injuries.

Brownie's owner, 45-year-old Yeo Poh Kwee claimed that the canine had been injured after its head was stuck between a water pipe and wall in the toilet.

Investigations found that Yeo did not bring Brownie to seek veterinarian treatment, which resulted in its death.

On Dec 21, 2016, AVA was alerted to a dog carcass that was found with blood stains along nearby walls and floors of an HDB block.

Investigations revealed that the toy poodle, Yoyi, belonged to Yeo, but was not licensed.

Yeo had brought Yoyi to Block 55, Teban Gardens Road with the intention of abandoning it. He ran down the stairs from the 38th to the 19th floor with Yoyi attached to him by a leash.

When he realised that Yoyi's hind legs were bleeding, Yeo unleashed the dog, abandoned it on the staircase landing between the 18th and 19th floors, then went home.

Yoyi, who suffered multiple injuries, was found dead where it was abandoned.

In addition, Yeo was sentenced to two months' imprisonment for pet abandonment.

One count of keeping an unlicensed dog was taken into consideration in sentencing.

As such, Yeo was sentenced to a total of 20 months' jail, which was backdated to Oct 11. This is the longest sentence meted out under the amended Animal and Birds Act which came into force in 2015.

Yeo was also issued a 12-month (the maximum) disqualification order (DO), which disqualifies him from owning any animal upon his release from prison.