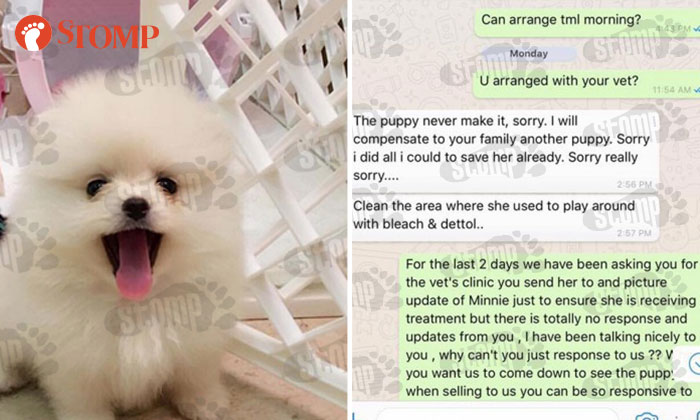 The accused, Aw Ying Liang, was also charged with one count of failing to comply with AVA’s written notice to be present for investigation.

In an earlier report, Stomper Belle alerted us to how her friend, 29-year-old Jorine Lim, had bought a Pomeranian puppy from Fatty Paws.

The dog died a week later from canine parvovirus, although Aw had told her that it was vaccinated.

Her story was backed up by another 40-year-old housewife, Mrs Josephine Lim, who said that she had purchased a Pomeranian puppy from Fatty Paws and it was diagnosed with canine parvovirus too.

In a news release, the AVA said that it had been alerted to a case where a puppy died from parvovirus in March, 2017.

During their investigations, the AVA had on three occasions requested for Aw to report to an investigation officer for statement taking, which he failed to comply with and was uncontactable.

Aw could be fined up to S$5,000 for breaching AVA’s pet shop licensing conditions.

The AVA also reminded the public that anyone who without reasonable cause, refuses or fails to comply with a written AVA notice can be jailed up to six months, and fined up to S$10,000.